As ABC’s Once Upon a Time wrapped its Season 5 premiere, onetime savior Emma Swan had gone “full Dark One” — which a summer’s worth of promos told us was coming. The huge questions the opener left us with, though, are how and why?

Upon offering herself to the Darkness in the May finale, Emma was transported to a different realm, where Rumplestiltskin, as a familiar manifestation of all Dark Ones before her, nudged her to embrace her new fate. 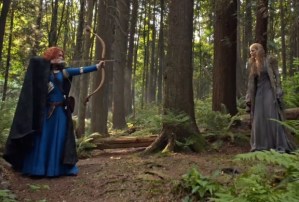 Emma though was resolved to find Merlin and rid herself of this curse, and to that end found herself butting heads with brave warrior Merida, to gain control of a Will O’ the Wisp.

Meanwhile back home, as Regina, Hook, the Charmings et al sought a way to track down Emma, the Sorcerer’s Apprentice produced a wand that could summon a portal. Alas, Regina’s good deeds in recent times have rendered her magic not dark enough, so a favor was needed from wicked Zelena. When Regina refused to meet her pregnant half-sister’s terms, Hook conspired with Henry to privately negotiate with the wicked one, only to see Zelena steal the pirate’s blade and no less than 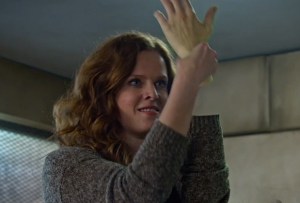 lop off her hand/remove the magic-depleting cuff, and then escape to conjure the portal herself.

Luckily, Regina rightly suspected that Zelena in doing so would not sustain enough power to actually use the portal. Instead, Regina gathered a group inside Granny’s (a couple of always-forsaken dwarfs, as well as Zelena, included) and sent the entire structure through the portal, where on the other side they promptly found Emma and stopped her from crushing Merida’s ticker. After Emma left Regina in charge of the dagger, King Arthur and his knights arrived on the scene to claim that Merlin foretold of this encounter, and invited the strangers to his castle. But the instant that everyone waltzed through its royal gates….

BOOM! They were back inside Granny’s as the diner crash-landed back in Story- brooke, with everyone dressed in fancy garb. Just as they learned that they’d been gone six weeks — of which they have no memory! — a frosty-haired, leather-clad Emma strutted in to announce that she had become the Dark One, because they failed in their bid to help her.

In the slideshow below (click here for direct access), Once co-creators Adam Horowitz and Eddy Kitsis answer burning Qs about the missing memories, Emma’s animus, comatose Rumple and more. (With reporting by Vlada Gelman) 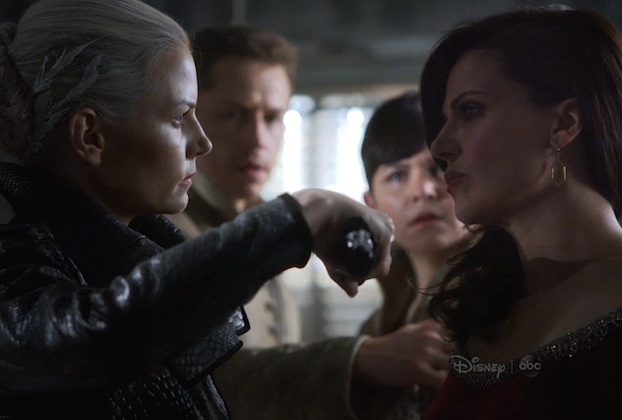