Backing up a bit… After Stewie’s teacher made note of his “attention problems,” Lois took him to Dr. Hartman — the same man who once prescribed Viagra to Droopy Dog as an antidepressant — who didn’t think twice about doping a one-year-old. The result was a zombified Stewie, one less concerned with global conquest than taking naps with his eyes open.

Brian, meanwhile, started taking Stewie’s pills for creative purposes, banging out a 2,000-page treatment for a ridiculous sci-fi drama that he eventually pitched to Game of Thrones author George R. R. Martin — or at least to a Martin imposter, who showed Brian the error of his pill-popping ways. “There’s nothing wrong with us,” Stewie concluded. “You’re just lazy, I’m just excitable. We’re both normal.” 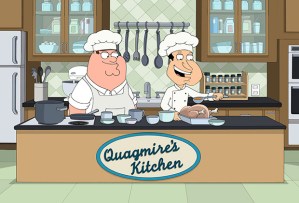 Across town, Quagmire and Peter launched a new cooking show on Channel 5, but when Peter’s shenanigans proved to be too much — his idea of “helping” involved doing the cinnamon challenge and Googling “Jodi Arias bikini” — Quagmire was forced to give him the boot. But instead of admitting defeat, Peter launched his own cooking show, Butter Sluts. (Even if you didn’t see the episode, I think you can pretty much guess what it was all about.)

The on-screen rivals, with Joe and Cleveland as their junior chefs, eventually faced off in an Iron Chef-style battle of butter, a challenge clearly tipped in Peter’s favor. But when he realized that winning the competition would destroy his friendship with Quagmire, Peter decided to throw in the towel (aka eat all of the butter) and let Quagmire win.

Peter and Quagmire also decided to get out of the cooking show business, knowing there was only one thing guaranteed to get them booted from the network: “the same way Paula Deen got her cooking show taken off the air, by saying one word you can’t come back from.”

Needless to say, Cleveland was not amused.

Family Guy fans, give us your thoughts on Sunday’s season premiere. Grade the episode below, then drop a comment with your full review. 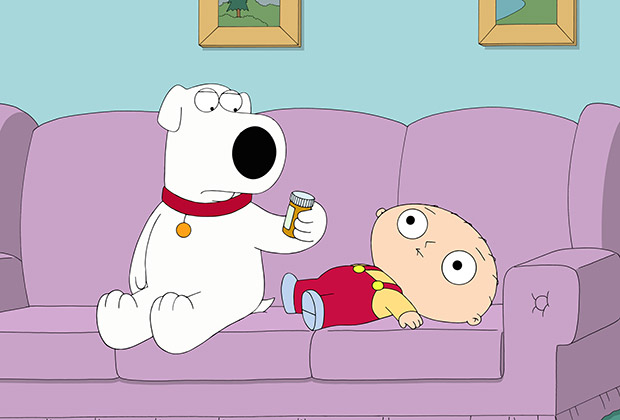