The flower did it.

OK, not exactly, but with William Petersen’s Gil Grissom back on the case, you knew there was going to be some obscure botanical reference — plus crazy twists like bees used as tracking devices (!) and some Lady Heather safe-word mumbo jumbo — in the pursuit of a dastardly bomber.

The final case — which brought Grissom (now working as a rogue investigator/eco-vigilante trying to save marine life) and Sidle (applying for the exiting Russell’s position) and Sanders and Brass and Willows (to name a few) back together again — began with a bang: A suicide bomber entered the Eclipse Casino (owned by now FBI member Catherine) and killed three people, injuring 15 others. It turns out the guy’s jacket pocket contained a key from Lady Heather’s dungeon, and when another of the dominatrix/therapist’s patients (a mild-mannered teacher) detonated a second explosive device inside a (barely cleared out) elementary auditorium (killing a bomb-squad member in the process), the question emerged: Had Gil’s one-time partner in sparring/flirtation/existential debate turned into a vicious sociopath after the deaths of her daughter and granddaughter?

The now divorced Grissom and Sidle took opposing sides of the debate: He maintained Heather’s innocence (in the absence of any clear facts) while she relied on the philosophies championed by her mentor-turned-lover-turned-thorn-in-the-side — which is to say she followed the evidence.

It turned out, though, that the initial two bombers were under the influence of a powerful South American botanical called Devil’s Breath that paralyzes “judgement receptors in the brain” and leaves those who’ve inhaled it susceptible to all kinds of manipulation. (Oh good grief!) Using DNA swabs from Heather’s VIP patients, painted bees searching the Las Vegas mountains for signs of human life (double good grief!), and a computer program depixelating a video message from the killer, the team learned the guilty party was Mr. Betten (Doug Hutchison), Heather’s first patient — and a man who blamed Grissom for the dominatrix’s decision to exit her dungeon, and later close her therapy practice. 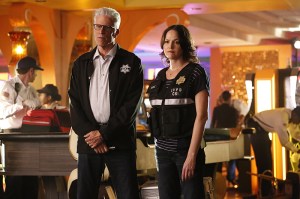 As Willows, Sanders and Brody perfectly synced the detonation of a three-bomb daisy chain that Betten had setup in a populated downtown building (a great moment of tension in a not-very-tense two-hour telecast), Grissom and Sidle confronted the cancer-stricken baddie and realized his explosive vest wasn’t even set to detonate. More importantly, though, Grissom’s monologue about the 52 Hertz Whale simultaneously described how the sociopath’s love for Lady Heather fell on deaf ears, and how his own poor communication skills made it impossible for Sidle to realize how much he still loved her.

At the end of a final videotaped Q&A with Heather (just some loose ends; she was cleared of any wrongdoing) Grissom thanked his old pal for cracking the shell around his heart. “Through you, I learned to love someone,” he said, before admitting it was Sara who restored his faith in humanity and also helped him with his crosswords.

When Willows’ daughter Lindsey (a budding CSI herself) delivered the video in question to Sidle, she hesitated, and then basically implored, “FF to the good parts at the end!” And thus, the CSI finale ended the way we all kind of knew it would: Grissom and Sidle, scientifically crazy in love, and aboard his boat, The Ishmael.

Meanwhile, it looks as though Willows will end up back in charge of the Vegas crime lab, Russell will be off to the CSI: Cyber universe, and in our minds, the first sight of a fictional crime scene will be synonymous with the rockin’ sounds of The Who.

On that note, what did you think of the CSI series finale? Grade it in our poll below, then hit the comments with your thoughts!