After a torturous wait to find out the identity of their new captain — amazing the way two minutes can feel like three months, no? — the cops of Brooklyn Nine-Nine finally meet Holt’s replacement in the Season 3 premiere: Seth Dozerman, played by Saturday Night Live vet Bill Hader.

Of course, it only takes 120 seconds for us to realize what showrunner Mike Schur meant when he said Capt. Dozerman’s arrival would be “far from the final surprise” in the premiere. After delivering quite the monologue about work ethic and efficiency, Dozerman collapses to the ground in what he presumes to be a heart attack. It isn’t, but he’s got a genetic heart condition that will shorten his life by about 40 years, and he isn’t going to let the precinct waste any precious time on the job. Much to Diaz’s chagrin, the new captain distributes “Dozerpads,” which will keep the team on task — and track their every movement, which isn’t creepy at all. 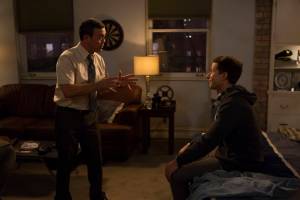 But Jake and Amy have more pressing matters to discuss. More specifically, they kissed, y’all! But Amy isn’t about to date a co-worker without laying some ground rules: 1) Don’t tell anyone. 2) No labeling their relationship. 3) No sex. (That last one only applies for about six hours, after which point Jake and Amy get really drunk on their awkward first date and sleep together. The best laid plans, right?) (Uh, pun not intended.)

At first, Jake and Amy’s decision to keep their romance secret goes swimmingly. Even Boyle, who is their ultimate relationship cheerleader, believes Jake’s lie that he’s merely dating a girl he met at the gym. That all falls apart, though, when Dozerman catches Jake and Amy making out in the evidence room, and the revelation prompts a heart attack — a real one this time. Which kills Dozerman. Less than 24 hours after he took the job. So… there’s that.

The new captain’s death forces Amy and Jake to reveal their relationship to the precinct, which earns them a scolding from Terry — pretty much Amy’s worst nightmare, being the perfectionist that she is. Amy confesses to Jake that she’d rather keep things simple and remain only co-workers… but that becomes the shortest breakup in history, as Amy shows up at Jake’s apartment that night and decides she’d rather be in an official relationship with him than lose him as a friend. (Yay!)

Other highlights of the season opener:

* In the NYPD’s public relations department, Capt. Holt can practically feel his brain cells dying as Wuntch forces him to help name the city’s new pigeon mascot, then wear the humiliating costume for a group of second graders. Holt is ready to throw in the towel and let Wuntch win their longtime game of chess, but Gina convinces him to keep his head held high.

* Speaking of Wuntch, she delivers another blow to the precinct in the form of their new new captain: Detective Pembroke aka The Vulture (Dean Winters), best remembered for taking over the team’s cases, stealing their thunder and generally being a tool. He’s in charge now, and I do believe Jake’s reaction says it all: “Nooooo!”

OK, your turn. What did you think of Brooklyn Nine-Nine‘s Season 3 premiere? Grade the episode via our poll below, then hit the comments to back up your choice!