It was almost exactly five months ago that ABC announced Emily Thorne’s Revenge plot would be ending. Does the network’s new drama, Blood & Oil, sate your need for Sunday-night drama?

The Lefevers starts off among the latter, their pockets filled with their savings and their head filled with the dream of opening, yes, a laundromat. But then Billy gets the idea to nab a parcel of land that’s valuable to Hap’s new venture. Billy borrows heavily from two sources, including local tavern owner Jules (India de Beaufort), to meet the discounted price set by Clifton Lundegren, an old salt who’s no friend of Hap’s. Billy then cuts a deal with Briggs for a cool million-plus dollars, 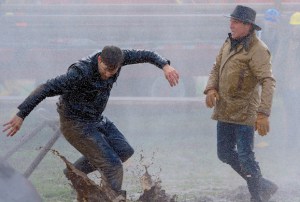 $50,000 of which he and Cody (who’s newly pregnant, BTW!) gift to a similarly entrepreneurial couple they met.

Billy’s play impresses Hap, who immediately touts the lad as having the enterprising spirit his son Wick (Scott Michael Foster) doesn’t have. Little does Hap know, Wick is conspiring with a local opportunist to steal from his own father’s well — a theft that is interrupted when Hap, his wife Carla (Amber Valletta) and the Lefevers visit the rig late at night. A skirmish ensues, the two young men wrassle in a pit of oil, until a stray ember ignites it, and… we fade to black.

Did Blood & Oil grab you? Share your thoughts in Comments.