For Will Friedle, there was only way to tackle the role of Star-Lord in Disney XD’s animated Guardians of the Galaxy series: “By knowing there was no way I could ever be Chris Pratt.”

“He gave a wonderful performance, totally knocked it out of the park,” Friedle tells TVLine of Pratt’s take on the Marvel hero in the 2014 film. “The idea of trying to do that just wouldn’t work, so I really had to go in saying, ‘I’ll take from that character what I can, then put my own lilt to it.’ The voice quality is completely different, but we keep the rough exterior and glib remarks. I’m certainly not trying to do a Chris Pratt impression.”

Disney XD’s series (premiering Saturday at 9:30/8:30c) picks up after the events of the movie, walking the line “between what the audience is familiar with and the new worlds people haven’t seen yet.” And although Friedle “can’t let the kitty out of the burlap” in terms of which familiar Marvel faces we’ll see along the way — besides Star-Lord’s fellow Guardians, of course — he promises “lots of incredible realms and heroes and villains.”

Having already voiced some of the most iconic characters in animation — including Lion-O in Cartoon Network’s Thunderats reboot (2011–2012) and Batman in Batman Beyond (1999–2001) — Friedle knows from experience that there’s “always pressure to live up to the original.”

“[Guardians] was one of my favorite movies of the last five or 10 years, so I didn’t want to be responsible for going in and ruining a character that so many people love,” he says. “Even though what I’m doing is different, there’s still pressure.”

And because Friedle admits his “luck” in the voiceover industry “keeps getting better and better,” it’s safe to assume he might someday land his two dream roles: 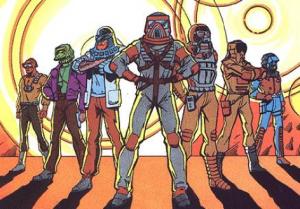 “There are a couple shows I grew up watching that I’d absolutely love to have something to do with,” he says. “The first one is G.I. Joe, which I’ve never had the opportunity to do. The other, which has never been brought back, is M.A.S.K. (pictured right), which stands for Mobile Armored Strike Kommand. I think it lasted for two seasons in the early-to-mid-80s, and it was all about the toys.”

Will you be checking out the Guardians of the Galaxy premiere tonight? Watch a clip below, then drop a comment with your thoughts.