THE PERFORMANCE | He may not have saved 155 lives in a spectacular emergency landing, but from a comedic standpoint, Anthony Anderson’s performance as Dre Johnson in the Season 2 premiere of black-ish approached Capt. Sully Sullenberger levels of daring.

In an episode that began with Dre’s grade-school-age son Jack dropping the N-word during a talent-show performance of Kanye West’s “Gold Digger,” Anderson managed to score enormous laughs while his character led an impassioned examination (and occasionally a defense) of one of the most divisive words in the English language.

At the top of the installment, as Dre’s wife Bo wondered where Jack might’ve gotten the idea it was OK to eschew the song’s radio edit, we got a hilarious flashback of Dre and Jack on their way to school, jamming out to the tune with joyous abandon and not a moment’s hesitation when they got to the bleep-able parts. A bigger and even funnier misstep came, however, when Dre and Bo met with Jack’s principal to discuss the boy’s possible expulsion. Overestimating the idea that Principal Green being black automatically put them on the same side of the argument, Anderson allowed Dre to cluelessly invade the administrator’s personal space with an unwelcome hug, coo “What is boppin’, brother?” and then, even more ridiculously, refer to him as “My n—-r!” Dre’s subsequent defense of his behavior — “How was I supposed to know the brother hadn’t seen Training Day?” — was delivered with such incredulity, his stance almost seemed reasonable.

Anderson continued to bring the LOLs as Dre polled his co-workers for their feelings on the racial epithet — and then got into a debate with his teenage daughter about why she wasn’t offended when her white friends (Dylan! Asher! Jacob!) dropped it into casual conversation. His voice rising an octave (as Zoey and Dre’s dad wondered if he’d eaten recently), Anderson rose to his feet and launched into a tirade that “My son should be able to say the N-word to his heart’s content — and Asher should never be able to say it!”

By the time he reached the school board meeting to decide Jack’s fate, however, Anderson dialed down Dre’s emotional temperature, allowing us to see a man who — while not entirely certain about his beliefs — was determined to make sure his child got a second chance. Pointedly citing the slap on the wrist Paula Deen got for her N-bomb and the Oscars won by Quentin Tarantino for dropping ’em in his scripts, Dre concluded, “This whole country has been schizophrenic about what to call black people for two centuries. And the last person who should be held accountable is an eight-year-old boy who doesn’t have an ounce of hate in his heart.” With that, he wrapped his son in a hug and exited the room — and Anderson once again put himself in the running for the E-word (that is to say, Emmy.) 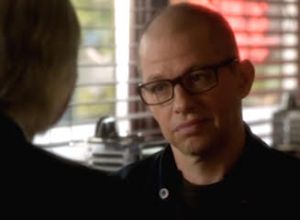 HONORABLE MENTION | As NCIS entered Season 13, Jon Cryer stepped up in a big way as the man in whose hands Gibbs’ fate lied. As Cyril Taft, the Two and a Half Men vet was, yes, again playing doctor, but here an esteemed surgeon who caught Gibbs’ case during a stint on a Navy ship. NCIS boss Gary Glasberg wanted a M*A*S*H-like feel to the role, and Cryer delivered just that — a quirky, quippy, capable medicine man, one who uses dark humor to lighten up grave proceedings. Two scenes stood out: first when Taft’s work was done and he whispered to that “tough sonuvabitch,” Gibbs, that he was owed a 12-year-old single malt. And then at episode’s end, when the men reunited months later and reflected on responsibility, mortality and such. In Taft, Cryer created an immediately memorable addition to the NCIS family, one with a special connection to the oft-unreadable Gibbs, that we hope is explored further.

HONORABLE MENTION | It was the booty-shake heard ’round the world. In Empire‘s Season 2 premiere, Grace Gealey tightly wound, sweater-set-wearing Anika Calhoun hiked up her skirt, let down her guard and proved to her rival (and reluctant business partner) Cookie that she was willing to do whatever necessary to complete their hostile takeover of Empire Entertainment. In this instance, “whatever necessary” involved twerking for the pleasure of Marisa Tomei’s billionaire investor Mimi Whiteman — and the result was comedic, gif-worthy gold. Later, when Mimi revealed she’d switched sides and aligned with Anika and Cookie’s ex Lucious, Gealey let us see the devastation in her character’s eyes. “I thought I told you to sleep with her!” hissed Cookie. “I did,” replied the gobsmacked Anika — subtly absorbing the blow from her closed eyes all the way to her toes as Mimi grinned dismissively and gave “Anita” an “A for effort.” Here’s hoping Gealey’s character gets an opportunity for revenge — and some more dancing — as the season progresses.
https://vine.co/v/ePY1lWKQTjA