The fate of the cheerleader may be up in the air, but the world is still in desperate need of saving during Heroes Reborn‘s two-hour premiere.

After months of anticipation (and/or ambivalence, depending on how you felt about the mothership series), NBC’s Heroes continuation debuted Thursday night, and boy, do we have a lot to cover.

For those of you who didn’t watch the Peacock Net’s six-part Dark Matter web series — which served as a prequel of sorts to Reborn — allow me to catch you up: After Claire Bennet broadcasted her powers to the world five years ago, she inspired thousands of other Evos — that is, “evolved humans” — to go public with their abilities. It wasn’t long before Evos started facing discrimination, and in the wake of a massive terrorist attack in Odessa, Texas, Evos are not only being blamed for the explosion (alongside Mohinder Suresh, who took the fall for the whole thing), but they are full-on persecuted for their powers. (One particular Evo, Phoebe Frady, went missing after the attack, and her half-brother Quentin has been on the hunt for answers ever since.)

Still with me? Good.

Heroes Reborn picks up one year after the catastrophe in Odessa, and the world is essentially divided between Evos and the ones trying to kill Evos. Let’s quickly break down the major players:

* Luke and Joanne Collins (played by Chuck‘s Zachary Levi and EastEnders‘ Judi Shekoni) — Definitely not Evos. After losing their young son in the Odessa attack, Luke and Joanne are tracking down every evolved human they can find… before putting a bullet through them. 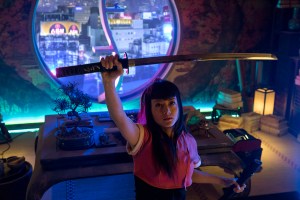 * Tommy Clarke (Once Upon a Time‘s Robbie Kay) — An Evo who can make people and objects disappear by teleporting them to whatever location he’s thinking about at the time. At the start of the premiere, he’s constantly bullied by classmate Brad — who, like most high school jerks on TV, never takes off his letterman jacket — but he eventually finds Brad and his girlfriend, Emily, to be allies. (Brad is under the grateful impression that Tommy made his alcoholic stepfather disappear, which Tommy didn’t actually do, but that’s for another episode.)

* Miko Otomo (Kiki Sukezane, The Yokai King) — And the award for Most Befuddling Superpower goes to… After being approached by an avid video game fan in Tokyo, who is convinced that Miko is the real-life inspiration for the game Evernow, Miko discovers that she can enter the video game world by touching an old sword her father left for her. Once there, everything that happens to Miko in the pixelated dimension happens to her in real life — for example, getting knocked unconscious by a ninja — as she goes on a quest to save her actual father in Japan.

* Carlos Gutierrez (Ryan Guzman, Pretty Little Liars) — After Carlos’ brother is shot and killed in Los Angeles, Carlos takes over his sibling’s alter ego of El Vengador, a masked vigilante who protects Evos and gets them to safety in Canada via an underground railroad. (Carlos, thus far, has no powers, but his nephew Jose can pass through solid objects.)

But the central character in Heroes Reborn is a familiar face to fans of the original series: Noah “HRG” Bennet, once again portrayed by Jack Coleman. Following the explosion in Odessa (where he assumes his daughter Claire met her demise), Noah has attempted to start a new life as a car salesman in Austin. He’s even got a wedding to plan! But when Quentin shows up in Austin, looking for answers about Noah’s old workplace Primatech (and its follow-up organization, Renautas, which Quentin suspects was behind Odessa), it’s back to the horn-rimmed glasses life for Mr. Bennet. 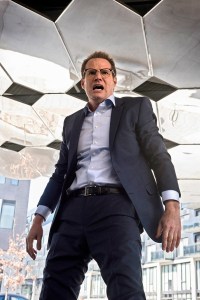 Noah has a brief reunion with former associate René — The Haitian! — who seemingly wiped Noah’s memory following Odessa. Thinking René to be an enemy, Noah kills the man (…oops…) and decides to work alongside Quentin to get to the bottom of Primatech’s connection to Renautas. Together, they visit Primatech’s old headquarters — which ain’t what they used to be, although they’re still up and running with Renautas employees — and discover that Claire wasn’t actually in Odessa on the day of the terrorist attack. Quentin, who finally confesses the truth about his missing sister and her powers, agrees to help Noah find out what really happened to Claire.

Luke and Joanne, meanwhile, also find themselves in the Primatech/Renautas offices, after Tommy teleported them there when they were on the verge of killing him. The trigger-happy Collins couple shoots every Renautas employee they lay eyes on before stealing Noah’s car, where they discover a list of existing Evos… and how to find them. Well, crap.

Having survived Luke and Joanne’s killing spree, Noah realizes that the only way to find out what really happened to Claire — and her whereabouts, if she’s still alive — is to track down Molly Walker, who can locate anyone in the world just by thinking about them (as fans of the original Heroes will remember). Unfortunately, Renautas is already planning to harness Molly’s abilities and turn them into a new kind of technology, which will make Evos easier to “bag and tag.” Even though viewers at home discover that Molly is in New York City (where she’s looking, uh, a lot more grown up), Noah and Quentin haven’t a clue about where to find her.

Your turn! What did you think of Heroes Reborn‘s two-hour premiere? Grade the episodes via our poll below, then hit the comments to back up your choice!