Legends of Tomorrow is downloading one of Mr. Robot‘s coolest features. 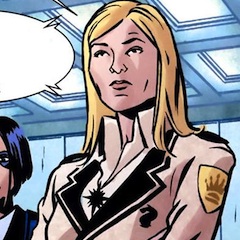 Valentina is described as a gifted and beautiful Soviet physicist who will stop at nothing to defend her precious “Motherland.” When the Legends encounter her at the height of the Cold War, they suspect her of working with Vandal Savage (Casper Crump) on a secret weapon. Ray/The Atom (Brandon Routh) and Leonard/Captain Cold (Wentworth Miller) must vie for Valentina’s affection in an attempt to thaw her cold heart, and find out where her allegiance truly lies -— before she completes her project and potentially turns the tide of the Cold War.

Prior to landing her breakout Mr. Robot role, Corneliussen guest-starred on Royal Pains, The Exes and Bad Judge.

Legends is slated to bow at midseason.