If you’re looking for similarities between Chuck‘s Chuck Bartowski and Heroes Reborn‘s Luke Collins, get ready to write a short list.

Outside of the fact that Zachary Levi portrays both men (and they each know how to wield a gun), Chuck and Luke have nothing in common — and Levi prefers it that way.

“My only prerequisite was I didn’t want to play Chuck again,” the actor says of his involvement with the Heroes revival. “I really wanted to play something that was darker and grittier and edgier and more f—ked up. I wanted somebody that had some problems. One of the things that [series creator Tim Kring] pitched, which I loved so much about it, was [Luke] really winds up in a very conflicted spot.”

To say anything more about Levi’s Heroes character would spoil the NBC drama, which kicks off with a two-hour premiere on Thursday, Sept. 24 at 8/7c. Until then, here are the basics: When the series picks up five years after the events of the original Heroes, Luke — alongside his wife Joanne, played by Judi Shekoni — will be among those persecuting the Evos, or “evolved humans.”

Ahead of the series’ debut, TVLine caught up with Levi about the reasons he signed on to the project, whether he would return for a potential Season 2 and why jaded Heroes fans should give the revival a shot.

TVLINE | You’ve mentioned in previous interviews that you were the one to approach Tim Kring about being on Heroes Reborn. How avid a fan were you of the original series?
I was pretty passionate, but only, unfortunately, in the very beginning. We started shooting Chuck [during] their second season, and I had no life. I barely had time to shower, let alone watch television. It was something that I had a lot of passion and love for, I was stoked it was on TV. I knew the whole cast because we were all working on NBC together. Even though Chuck was awesome and fun and I had my Intersect powers, I was somewhat envious that they were mutants. It was like X-Men on television, and I was a huge X-Men fan as a kid, and even now. I was definitely a fan of what they were doing. 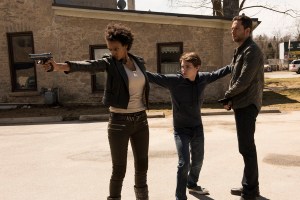 TVLINE | When Heroes Reborn was announced, had you been actively seeking out your next major network TV role — especially one that was the anti-Chuck?
Yes and no. For me, it’s less about the medium and more about the role. After Chuck, there was definitely a let’s-take-a-break-from-TV-specifically [feeling], because it really was an all-consuming job for me. I missed a lot of life — a lot of weddings and funerals and babies being born. But even then, whether it was Broadway or a film or a guest star, I wanted it to be about a role. You always want to try to make it about the work and the role. I kicked around, and I did Broadway, but I am a creature of habit and routine. I like being able to go to work and know my people. Films aren’t as consistent in that, and even with Broadway, it’s super-intense, but you’re there for the show and then you all disband. On a TV show, you’re together all day long, and I just like that. There’s something very magical about that and something that’s constantly reminding me of, “Wow, this is the life you always dreamed of, and you’re living it.”

Eventually, I got to the place of, “I’d like to have a steady gig again, but I don’t know what that’s going to be.” Because Heroes Reborn was a miniseries, I thought [that’d be] a good way to start [getting] back into that world, with 13 episodes, while still looking for whatever role I want to play for another five-year series.

TVLINE | There have been a few limited series this year that ended up getting renewed for second seasons. If that were the case with Heroes Reborn, would you be interested in coming back?
I don’t know. So much of the reason why I wanted to do it was because it was only one season. I really am very passionate about the stuff that I do — so much so that I can probably be a massive pain in the ass to my bosses. [Laughs] I care about every detail. I really have a directing, producing mind. I don’t know that I would be able to do another full-fledged, multi-season series unless I was an executive producer and I was calling the shots. I just get too frustrated about certain things, and I don’t want that for me, and I don’t want that for whoever I’m working for to be like, “F—k, Zach, we get it.”

TVLINE | Your Heroes character, Luke Collins, is widely considered “the villain,” from what we’ve seen of the show so far. Do you consider Luke the bad guy of the series?
I’m playing him the way that I feel is the most honest to the way he’s been written and what the trajectory is. Whether people see him as a villain or not is up to them. All the best villains are people who really believe that what they’re doing is the right thing to do, and it’s even more gray for Luke. It’ll be interesting to see what people’s reactions are to the first two episodes and then moving on after that, [in terms of] his particular journey and trajectory.

TVLINE | Some of the series’ original characters, like Claire Bennet and Peter Petrelli, won’t be back for this miniseries. Which of those original characters would you most like to see return?
Oh, man. Probably Sylar, but just because [Zachary] Quinto is such a good buddy of mine, and it’d be really fun to work with Zach. I’ll stick with Sylar.

TVLINE | It seems like the original Heroes fan base is a bit divided. There’s so much excitement for Reborn, and they also feel a little gun-shy about a revival.
Apprehension. Yeah, absolutely.

TVLINE | What is your pitch to those fans who are hesitant about jumping back in to the Heroes universe?
It’s unique in and of itself, just because we have so many new characters. That’s very unique. I know that the intention is trying to harken back to the original — the first season. I would just say give it a shot. If you don’t like it, OK. That’s fine. But check it out. I hope they’re satisfied, and I hope new audiences find it, too.