When last we tuned into CBS’ Hawaii Five-0, Steve and Danny had just saved the island from nuclear catastrophe (even if it put a crimp in Kamekona’s sales), all whilst on their way to Kono’s wedding to Adam. As a last wrinkle in a wild finale, Chin Ho was ominously confronted by his onetime bro-in-law Gabriel, just as the ceremony was to begin.

TVLINE | When last we spoke, you said the premiere would pick up near continuously from the finale. Is that still the plan?
The only thing we’re going to miss is the actual wedding ceremony. If you saw the last episode, Chin Ho had a confrontation with Gabriel in the parking lot, so Chin will be sharing that story as Kono and Adam are being introduced at the reception, as husband and wife.

TVLINE | What do you want to say about Gabriel’s agenda?
Wo Fat was a villain that we had for years, but his agenda was very personal. For Gabriel, he’s more of a sociopath. He’s a bad guy because he’s a bad guy. I don’t think you’re going to find out, at least for a while, what his real agenda is, but it’s definitely not personal.

TVLINE | So, no smooth sailing for newlyweds Kono and Adam?
Not in the first half of the season! Look, if things were content, it’d get a little boring, so they’re definitely going to have a very rough start to their first year of marriage.

TVLINE | Danny just learned that Charlie is his son, so many of my readers want to know: Will we see them together, bonding?
It’s definitely a story arc for the season. It’s funny because we sort of planted this seed years ago, when [Danny and Rachel] had this little affair and she found that she was pregnant. At the time, there were some people saying, “Oh, I bet that down the road they’re going to find out that it’s Danny’s kid.” That sort of bummed me out because I thought I was being so clever! I was going to reveal it the year before but I just decided to hold off, because I was hoping people will start forgetting they posited that theory. But yeah, there’s a nice little runner of Danny having to take some time off to do that surgery, and in the Halloween episode, he gets to trick-or-treat with Charlie at the hospital. The same way we saw him raise Grace in the early years of the show, you’re going to see him now with a new kid. He’s a guy who wears his heart in his sleeve so it’s fun watching him interact that way. As grumpy as he is, with kids you see a while different side of Danny.

TVLINE | What’s the plan for Steve and Catherine? They reunited in the finale, but things were a bit awkward, tentative.
We play that uncertainty in the first couple episodes. There’s a big change that’s going to happen in their relationship, which really shifted at the end of the previous season, when she left [to stay in Afghanistan]. It’s hard to get things back on track as much as they both want to, because she did make that choice — and we’re going to see her make another choice that’s going to come up early in the season as well.

TVLINE | And what of Steve’s “bromance,” with Danny?
There’s an episode where they end up going to a couples retreat to sort of burn off some of their therapy time, because they’ve got to put in a certain amount of hours. It’s a really fun story.

TVLINE | What sort of personal stories will you be telling this season?
We’re going to introduce a character (played by Defiance’s Julie Benz) who’s going to be on loan from the San Francisco police department and she’s going to end up having a relationship with Chin Ho. Maybe there’s going to be a romance there. Danny, meanwhile, still has some juggling to do with his ex. In the Halloween episode, Grace lies to her mom — she’s supposed to go to a friend’s house but ends up going to a party in the North Shore — and Danny has to go down there to get her. It’s every parent’s nightmare, to infiltrate a party and drag their kid out!

TVLINE | Grover had some unfinished business with that old friend of his, the one who murdered the wife. Will you revisit that?
Yeah, we’re actually going to wrap that up with Mykelti Williamson. That’ll probably be in, like, January, at latest the beginning of February.

TVLINE | Lastly, any particularly interesting cases to tease?
The premiere is loosely based on a legend that pirates attacked the island in the 1880s, so we actually open up seeing that pirate attack, in a flashback. It’s our version of Pirates of the Caribbean, where pirates are attacking the palace and the streets of Waikiki, and that sort of launches us into a modern-day hunt for the treasure that they had stolen. 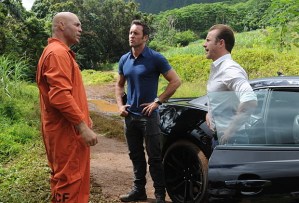 It’s a big National Treasure-meets-Pirates of the Caribbean episode, so that’s definitely fun.

Duclair, the pyromaniac from last year, is back in the second episode, played by Randy Couture. Carol Burnett’s back… We have a really fun boxing episode, our version of Flloyd Mayweather Jr. versus a local fighter… And the Halloween episode is great, offering a spin on a Frankenstein story, where a guy is trying to bring back his dead girlfriend… but in a very twisted, dark way. The best thing about the show for us as writers is we’ve got three-dimensional characters to play with, each with very different personalities. The plots are fun, too, but the fun stuff is all the character stuff we do.