Heads up, losers! This post contains a big ol’ spoiler from the first half of Tuesday’s Scream Queens, so turn back now if you haven’t seen it.

Less than halfway through Tuesday’s series premiere of Scream Queens, the Fox slasher-comedy offed one of its biggest names: Ms. Ariana Grande (aka Chanel No. 2).

To be fair, Grande’s character did kind of ask for it. I mean, the Red Devil — Scream Queens‘ masked killer — was polite enough to request admission into her bedroom (via text), then gave her fair warning before stabbing her in the throat. 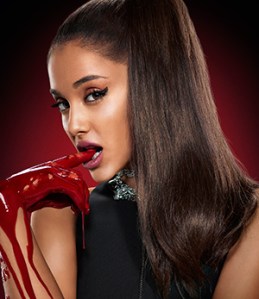 I’d also be remiss if I referred to Grande’s death as a total surprise; in addition to her being MIA from future episode stills, which many fans noticed, part of her final scene also leaked online earlier this summer.

That said, this first death — assuming you don’t count Ms. Bean, Chanel No. 4 or that unknowingly pregnant sorority sister — absolutely set the tone for Scream Queens‘ future murders. There might be a few laughs involved, but make no mistake: There will be blood. And occasional tweeting.

Fortunately, according to executive producer Brad Falchuk, this isn’t the last we’ll see of Grande:

@BFalchuk @ArianaGrande Is she gonna comeback?

On the off chance you were shocked by Chanel No. 2’s murking, let’s hear about it in a comment below.