“It’s wild: Normally, I do a big live show, and then I never do it again,” Harris says with a laugh. “With an awards show, you spend a lot of time preparing it but then are out of a job for awhile.”

That isn’t the case with his new eight-episode venture at NBC, which in its first installment featured the host zip-lining from 15 stories above ground with Academy Award winner Reese Witherspoon, and closing the hour with a pogo stick trick that culminated in a daring (albeit successful) backflip.

“This [show] is a fast-moving treadmill,” he tells TVLine. And while it would be natural to have felt nervous, euphoric or downright sleep-deprived following such a strenuous debut, Harris was just satisfied to have one installment under his belt. “It felt like a show that we had been putting together for an awfully long time… and to know that it’s out there now and people can see what the content of the show is makes me happy.”

Some segments were harder to piece together than others, of course, forcing months of preparation before going to air. For example, the premiere’s “Best Days of Your Life” segment found Harris following an unsuspecting couple around for months — first at their wedding, then at a football game, and later in disguise as they checked in at New York’s Plaza Hotel. Before their appearance on last Tuesday’s show, the couple had no idea about Harris’ proximity. 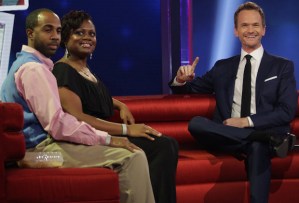 “The fun of that segment for me is watching them while they’re up on the couch, realizing everything that has gone down,” he said. “There’s that feeling of, ‘Be careful because you never know if NPH is five steps behind you!'”

In Episode 2, one half of a couple works in cahoots with the Best Time Ever production staff to fool the other; in another episode, a fangirl finds herself interacting with a bevy of her favorite celebrities, with the catch being that the celebs aren’t privy to this staged meet-and-greet.

Despite the fun and games, not every “Best Days” segment will feature Harris. In fact, when asked if viewers would have the chance to see the song-and-dance man bust out a tune, he seemed hesitant to the idea of taking the spotlight away from Best Time‘s participants.

“My singing doesn’t really align with the segments within the show,” he said. “We have a great [karaoke] segment called ‘Singalong Live,’ but it’s really to allow someone else to sing a classic song, and most importantly, to have viewers at home be able to sing, as well. I think to stop the proceedings to have me sing a song is a little out of context.” 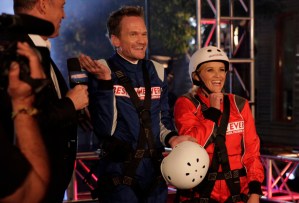 Harris seems most excited for the opportunity to work alongside some of his famous friends, including Tuesday’s guest announcer, Alec Baldwin (30 Rock).

“I’m just beyond thrilled that he said yes and that he’s going to come and play,” he said. “Alec has a podcast and has done a lot of voiceover work, and when I can get someone that has a very recognizable voice and knows how to use it, that, for me, is amazing.”

As for whether Harris has found any time to check in with pal Ryan Murphy about a potential return to the American Horror Story franchise?

“It was a great honor for myself and for [husband] David [Burtka] to be players in Freak Show, but yeah, I’m busy with this show,” he said, nixing the idea of a Hotel residency. “I think the Hotel is booked, as they say. There’s no vacancy at the moment, but I can’t wait to see what’s going to happen.”