The following recap, by the very definition of the word “recap,” contains spoilers from the NCIS Season 13 premiere.

It took the mad surgical skills of one of the Two and a Half Men, but NCIS‘ Leroy Jethro Gibbs will live on to fight another day. The question now is: Does he want to?

Rushed into surgery aboard the U.S.S. Daniel Webster, after being shot twice by Luke, Gibbs is taunted by Mike Franks, who said his friend “never saw it coming.” The ghost adds: “What does that say about us?” 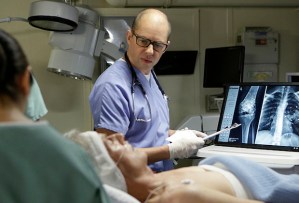 who once was courted to be POTUS’ personal physician. Taft announces that while they can easily give Gibbs a new knee, the second bullet shattered on impact and in turn spawned a buncha bleeders inside his chest.

During surgery, Gibbs at first imagines himself in the big orange room beside an oblivious McGee and Bishop, the Most Wanted wall plastered with the faces of those Gibbs has lost. His dearly departed daughter Kelly arrives to leads him to the beach, where they revisit a family fishing folly — a “good day” — with wife/mom Shannon (cue archival Darby Stanchfield footage). “We don’t have good days now,” Kelly observes. “You spend too much time thinking about the past…. Things are different. It’s about the future now.”

Gibbs comes out of surgery A-OK and, months later, resumes work at NCIS, where Calling kingpin Daniel Budd’s face now (and still) has primo real estate among the Most Wanted. Restricted to “administrative duty” by Vance, Gibbs learns that DiNozzo and Teague have followed Budd’s trail to Shanghai. When Tony later checks in, he’s surprised to hear that Gibbs is back ahead of schedule, yet must rush off the call before he and Boss can exchange any words — visibly irking the latter, who decides to go for a “walk.”

Gibbs pays a visit to incarcerated Calling member Michael Rousseau, who refuses to give up any intel on Budd or his plans. Hoping to drive his point home, Gibbs rams a pen into the terrorist’s hand — an act which Vance later questions him about.

A seemingly new wrinkle comes into play when SecDef reports that North Korea is preparing to launch missiles from one of its subs, and that a computer linked to the attack is in NCIS’ possession! It turns out that Budd had long ago “backdoored” Dorney’s laptop and is now using it to hack the Pentagon and fake the launch alert. Luckily, McGee & Co. are able to access Dorney’s laptop and undo the damage before Budd can demonstrate to the Chinese that he can manufacture war.

Over in Shanghai, DiNozzo and Teague infiltrate one of the Calling’s bases, where they find Luke and inform him that Gibbs survived the shooting. An admittedly relieved Luke Skypes with Gibbs, who tells that lad that “what happens next is your decision.” Luke apparently helps out, since DiNozzo later winds up coming face-to-face with Budd, first amid a busy marketplace and then privately, in an alley.

When the cornered Budd brags that “manipulating the legal system will be child’s play for a man of my talent,” Tony shoots him in the leg, explaining: “You’re not a Bond villain, you’re a fraud — and frauds don’t get to speechify like Bond villains.

“They do get to die like them,” Tony adds, which Budd in fact does after being gunned down in self-defense. 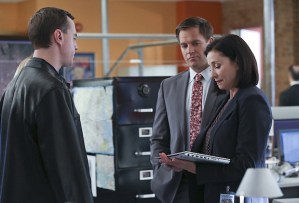 Back at NCIS, Gibbs reports that Luke has been remanded to a halfway house, while McGee gives the departing Teague her son’s laptop. DiNozzo reunites with Gibbs, saying/asking, “Everything’s back to normal?” Then: “Do we need to talk, Boss…?” Gibbs flatly responds, “What would you like to talk about, DiNozzo?” before getting up and walking away, leaving Tony puzzled/concerned.

Where is Gibbs off to? A meet-up with Dr. Taft, to whom he gifts his preferred single malt. “Everybody is watching me, afraid I’m going to break…,” Gibbs shares of his return to NCIS. Taft relates a story of how he eventually returned to work after losing a son to leukemia, saying, “If I wasn’t back at it, I’d be nowhere.” When Gibbs says he’s glad the doc stayed active, Taft asks: “Are you?” — because, he has learned, there are two kinds of patients: those who revere him for saving their life, or despise him. “Which one are you, Gibbs?”

Gibbs doesn’t answer, but instead sighs, “Things are changing. I can’t do it alone.” To which Taft counters, “I’ve met your team…. Who says you’re alone?”

And yet Gibbs’ face suggests he nonetheless feels adrift, searching for his purpose, old or new, in the wake of his latest scare.

What did you think of the NCIS premiere and guest star Jon Cryer?