If you’re a glass-half-empty type, then Brian Finch, the protagonist of CBS’ new drama series Limitless, comes out of Tuesday night’s pilot episode having endured some seriously awful stuff.

Forced to crawl on his belly through New York City subway-system skank. Gobsmacked by the murder of an old pal with whom he just reconnected. Possibly addicted to a new and incredibly potent drug. Perhaps worst of all? Finished with a temp job that was supposed to last two weeks — but only took two hours.

But as I sit here swirling my glass, the Sauv Blanc swooshes three-quarters of the way to the rim — and Jake McDorman’s protagonist appears to be having the best week ever.

Dude’s got access to the same wonder-drug (NZT) that unlocked every hidden pathway and illuminated every tiny bit of knowledge in Bradley Cooper’s brain in the big-screen thriller Limitless. 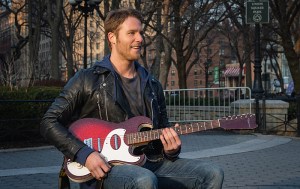 It’s the little clear pill that allows 28-year-old Brian to: Diagnose his gravely ill father’s rare disease; zip across multiple lanes of traffic like the world’s foremost expert in Frogger; bolster the career prospects for an under-appreciated (and very pretty) future CEO; master the guitar like he’s a shoo-in on America’s Next Top Clapton; and land a consultancy with the FBI (and a secret pact with Cooper’s Senator Edward Morra that’ll keep his bloodstream as full of NZT as Wendy Williams is flush with gossip).

The horror of a close encounter with pizza rat aside, Brian’s Limitless Pilot Adventure is a whole lot of fun — even if it sets up a procedural construct that’ll probably be less ambitious than its “Whoa. Whoa! WHOA!” movie cousin. But enough speculation — let’s pithily recap the action.

* The hour kicks off with our protagonist getting chased through Manhattan by FBI agents — a sequence that ends with him jumping casually onto a subway track and grinning as it bears down on him. We learn via flashback that aspiring musician Brian feels stalled as his family and friends mature and their lives take root — a fear that is exacerbated when his father (Cooper’s onetime Alias cohort Ron Rifkin) collapses with a mysterious ailment. Brian runs into his old bandmate Eli at the aforementioned temp job, and the now high-flying banker offers him a tab of NZT to “jump start” him out of his rut. First order of business: Crushing the filing job (and helping his downtrodden supervisor by sorting the entire bank staff’s files into five tiers of potential risk); becoming a world-class guitar player; and diagnosing his dad with hemochromatosis. 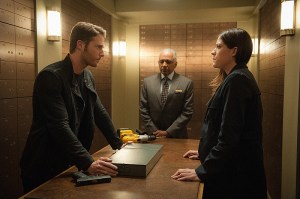 * Unfortunately, when Brian goes back to Eli for a second tablet, he finds his friend dead — and also finds his NZT stash — just as the FBI arrives. We end up back on the Subway platform where agent Rebecca Harris (Dexter‘s Jennifer Carpenter) looks into his eyes — and decides not to shoot, paving the way for his grand escape. Rebecca and her partner learn learn why their boss was looking for Eli — the deceased banker was exhibiting the cognitive enhancements of NZT (without the rapid aging and eventual death that happened in the agency’s field tests). Rebecca begins to believe Brian is innocent — and after guiding him over the phone through patching up a bullet wound, teams up with him to put the real bad guy (another smug Wall Street type) behind bars. 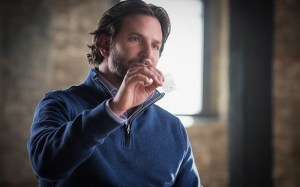 * But first, a side note: When Brian wakes up from his bullet wound, he finds Cooper’s Sen. Morra there, explaining that he’s got access to an injectable cyclical enzyme system (or something) that will allow Brian to take NZT every day with no side effects. It’s exactly what catapulted Morra from slacker wannabe writer to possible presidential candidate in just four years’ time. “You’re on the verge of having a life most people can’t begin to imagine,” Mora promises — before telling Brian he’ll have to be his eyes and ears with the FBI if he wants the arrangement to continue. Oh, and if Brian whispers a word of their meeting, “I will let you die more painfully and slowly than you can fathom,” Morra adds. Yikes!

* Sure enough, Rebecca offers Brian a spot on her task force — turns out, her former-addict dad was on NZT the day he died, and she figures if the FBI wants to monitor Brian’s immunity to the drug’s side effects, they might as well put his skills to use. He agrees — as long as she can get his dad to the top of the liver-transplant list. And she’s got a requirement of her own — one that could prove impossible for Brian to maintain (without breaking his bond to Morra): “Just don’t lie to me — ever.”

Somehow, I’m thinking Brian’s day-to-day involvement with Rebecca will make him more loyal to her — but the NZT in his system will probably dictate his loyalty to Morra, no? But enough from me.

What did you think of the Limitless series premiere? Grade the episode in our poll below, then hit the comments to back up your choice!