During Scorpion‘s Season 2 premiere, Walter is tasked with saving 10 million lives from a nuclear-powered satellite hurtling toward Earth — and he needs to do it with a banged-up hand and constant dizzy spells giving him trouble.

But in comparison to his love life woes, the whole Southern-California-blowing-up thing seems like a walk in the park.

WALTER & PAIGE | Let’s dive right into Walter and Paige’s so-uncomfortable-they’re-cute interactions, shall we? When Walter returns to Team Scorpion’s garage for their latest assignment, Paige flat-out admits that she kissed him while he was unconscious in the hospital, but she’s willing to brush it off and move on as “professional colleagues” if he is — and he is! End of episode!

JK. Halfway through the team’s life-or-death case, Paige accidentally pulls up a file on Walter’s computer… of the incriminating hospital footage… which he hacked into… and now has playing on a loop. (Watching this scene is the definition of “secondhand embarrassment.”) When Walter and Paige get some alone time later in the episode, Walter admits that he does have feelings for Paige, but he’s not willing to act on them if it means compromising Team Scorpion’s success. Paige is crestfallen, and Walter doesn’t seem too pleased about the arrangement either, but they’re forced to grin and bear it at least until they successfully stop Pasadena from blowing up. (They do, but more on that in a minute.) 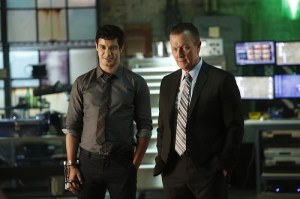 Later that night, Paige and Walter conveniently realize that they never actually tested the hypothesis that Team Scorpion would fall apart if they acted on their feelings. So, they kiss, and it’s definitely not the smoothest operation. There’s a desk getting in the way, and Walter can’t exactly be sexy with a metal cast on his hand, but when he pulls away, both parties are so flustered, they can barely pretend that they’re not totally into each other. They once again decide to remain colleagues and nothing more, but considering Paige looks like she needs an icy shower at the end of the hour, that agreement should last two more episodes, at most.

THE CASE | As for Team Scorpion’s Case of the Week, they’re recruited by Homeland Security’s new director, Adriana Molina (played by Forever‘s Alana De La Garza), to stop a Russian satellite that was knocked out of orbit and will basically serve as an atomic bomb if it hits California. Walter’s still suffering from post-concussion syndrome — which is made worse by stress — but he decides to go back to work anyway, and boy, does the team have some hiccups. They’ve only got three hours to send the satellite into the ocean, and their first two attempts go horribly wrong. Like, “Let’s get ourselves to a helicopter before SoCal explodes” levels of wrongness.

Fortunately, Walter realizes that they can reprogram the satellite’s coordinates by blasting it with an electromagnetic pulse, which he and Paige will send out just as soon as they can fly up in a weather balloon. (Just another day at the office, right?) And even though Walter and Paige encounter just about every possible obstacle while they’re up in the sky — including the satellite hurtling straight at them — they manage to send it sailing into the ocean as they parachute back to safety.

TOBY & HAPPY | Happy begins the episode with the same opinion on dating Toby that she used to have — she’d rather eat glass — but Toby manages to persuade her over the course of one hour, using an odd-but-sweet metaphor about moldy cheese. After he saves Happy from going blind in her right eye (no thanks to a faulty wire), Toby is understandably shocked to hear Happy admit she’s scared of getting her heart broken — but he reassures her there’s no chance he’d ever hurt her. (So, what’s their relationship name? Tappy? Hoby? We need ideas, people.)

With that, I turn it over to you. What did you think of Scorpion‘s Season 2 premiere? Grade the episode via our poll below, then hit the comments to back up your choice!