“In the blink of any eye,” NCIS: Los Angeles showrunner Shane Brennan marvels, the NCIS offshoot has arrived at its seventh season, within which it will mark its 150th episode.

TVLINE | If I’m Callen there at the close of the season finale, am I believing what Hetty has said about my father?
At this point, what Callen knows is that his mother’s dead and his father’s dead. That’s what he believes. But what the audience knows is… it looks like his dad is having some coffee at the shop there. [Laughs] That chapter in his life, while Callen thinks it may have concluded, the audience knows there’s a little more to come.

TVLINE | Oh, I’m sure that once his motivation is revealed, they’ll all hug it out.
It’s revealed, but it’s not resolved. In the great tradition of this show we plant the seeds of something to come, and it has a fairly major impact halfway through the season, in a pretty large double episode. Look, this is going to be a really fascinating season. We’ve got it all mapped out and we have so much story [that] it is like two normal seasons — and that’s saying something, because this show doesn’t tend to dawdle, it doesn’t tend to go slow. We always have our foot on the accelerator, but this season is jam-packed.

TVLINE | And you have Episode 150 somewhere in there, right? Anything special planned?
It’s a normal episode, and actually a very funny episode. It puts Kensi and Deeks together in an undercover operation, as a kind of protection detail. It’s got some great guests in it, and it’s one of those shows that will be memorable.

TVLINE | What shenanigans is Mr. Michael Weatherly bringing over with him? [The NCIS star crosses over as Tony DiNozzo in an October episode.]
Let’s start by saying this is probably one of my Top 5 episodes of the 150-odd that we’ve done. It’s not a token appearance. This isn’t a cameo. Michael is in virtually every scene. Because you have to get the DiNozzo/Hetty scene. You have to see the DiNozzo/Callen scene, and DiNozzo/Sam…. And what he brings is a classic DiNozzo moment in which he’s in Los Angeles to pick someone up who’s getting off an airplane and, goodness me, they’re not there. He’s about to be in serious trouble with his superiors back in Washington, so he needs the help of our team in L.A. to help him find the person he was supposed to pick up. It’s kind of a scramble, and it’s just a lot of fun. It really is.

TVLINE | Does anyone on the L.A. 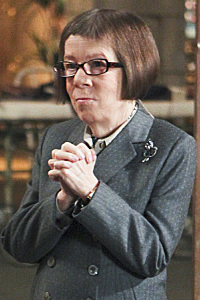 team share a specific dynamic with Tony?
We could suggest that Hetty treats him [Laughs] perhaps the way Gibbs treats DiNozzo. There are a couple of classic moments — I won’t give them away, but everyone should watch the last 30 seconds of the show. Michael was a delight to work with, totally committed to the show. At that point [we filmed this] he had finished production on NCIS [Season 12] so he was available to us the entire shoot… We got our money’s worth!

TVLINE | Are there any new backstories you’ll be exploring for anyone this season?
If you look at the season, thematically it’s got a very “family” sort of theme running through it, from all directions. There was concern about putting Kensi and Deeks together, that it might end badly, and that hasn’t happened at all. These characters together are as much fun — and probably even more fun — than when they were circling each other and courting. Putting them together has created this whole other storyline, and you see it right from the get-go in the first episode. In the first five minutes, there is this great scene between the two of them that speaks to who they are as individual characters, who they were, and who they are now as a couple.

TVLINE | So things are serious? It wasn’t just about the chase for them?
Ohhh, it’s very serious. This is the real deal for them. There’s a line in an episode where Deeks says, “Are you pregnant?” Now, I’m not going to add anything that might help you read into that, but certainly their relationship is at a totally different level. And it is tested before the halfway point of the season, when that Internal Affairs investigation that has hounded Deeks comes to a head. 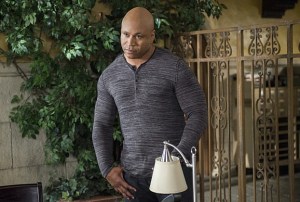 That’s one thing we’re going to resolve this season.
Meanwhile, Callen’s journey and writing that final chapter of his life, we go a long way down that path this season. We have an amazing end to the season with Sam facing the biggest challenge of his career – not just his career with NCIS but also his career in the Navy as a SEAL. He’s never been through something like this, so the season finale puts him in a place that he’s never been in, and it’s a really, really powerful story for him that has probably the most dire consequences if he doesn’t get it right.

TVLINE | Any teases for Eric and/or Nell?
I’ll give you a little tease: Sam is going to give Eric weapons training. Eric’s at that point where he wants to me more of a “macho man” and prove himself, so for the fans who have watched Eric from the beginning, you realize this is fraught with danger, for everyone involved! [Chuckles] The idea of Eric with a gun is a dangerous idea. We also certainly see more of the Nell/Eric relationship; it’s not as developed, obviously, as Kensi/Deeks, but there’s more fun to be had there.

TVLINE | Did I see that Mercedes Masohn is back for a bit?
Yes, we love Mercedes. Talia has such a powerful impact on the Kensi/Deeks relationship, any opportunity we have to get Mercedes into the show is always a good thing. She’s back for an investigation that teams them together. There are other recurring characters on this show that we’d love to bring back — Arkady is a really good example of that, and Talia has become another of those characters, too.

TVLINE | Speaking of Arkady, do you know who I liked and felt “popped”? Anna, played by Bar Paly [in the Season 6 finale]. Might you bring her back?
Stay tuned. There’s a big, big, big storyline coming with that character, in a very expected way. I haven’t told anyone else that, so that’s yours. Yeah, from our point of view she’s a real find for the show, and something major happens with her this season.