You couldn’t swing a dead Catwoman without hitting one of Fox’s “Rise of the Villains” promos for Gotham this summer. Now that you have gotten a first look at what this bigger, badder world actually looks like, will you tune back in next week — same batty time, same batty channel?

The premiere, if only for a brief minute, picked up right where the finale left off, with (a taller) Bruce descending the discovered staircase into a… cave… where he found a door protected by a keypad lock. Bat-Drat!

We then jump ahead a month, where a sober Harvey Bullock has traded his badge for a barkeep gig and traffic cop Jim Gordon is being accosted by a cheaply costumed loon who dubs himself “Zaardon, the soul reaper.” In the course of fending off the crackpot, Jim shoves a slacker colleague of his, an action which gives Commissioner Loeb 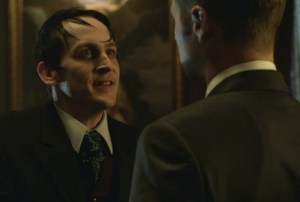 cause to take his badge. Later, Jim indicates to Lee that he may have a not-legal avenue by which to reclaim his job….

Thus, Jim pays a visit to Penguin, who happens to be having trouble with a debtor named Ogden. Penguin astutely deduces Jim’s desire — to get his job back, and have Loeb gone — but in trade, as a sign of “equity” in their friendship, he wants the fallen cop to lean on his welcher. Jim at first declines the arrangement, but then receives counsel to the contrary from, of all people, Bruce Wayne (“You’re dirty, what have you been up to?”), who suggests that sometimes the “right” way is the “ugly” way, 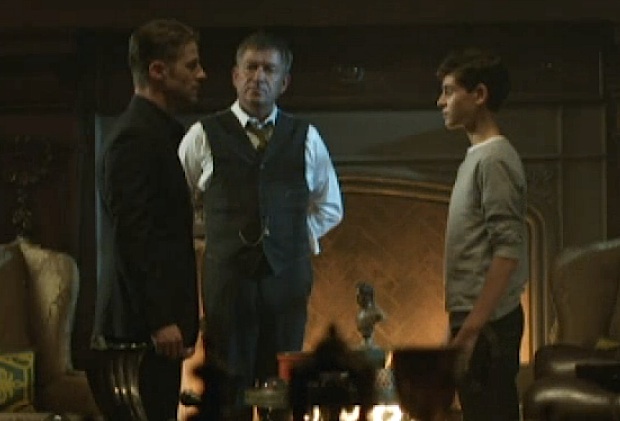 that Jim is letting his dignity get in the way of a greater good.

After that exchange, we see Jim pay a visit to Ogden, overpower the gangster’s goons, grab the owed cash and then get caught up in a parking garage shootout, fatally felling Ogden in the end. Afterward, Penguin promises to make good on his end of the deal, and he does, by popping up in Loeb’s kitchen late at night with a trigger-happy Victor Zsasz. All paving the way for Commissioner Essen!

Jim meanwhile is hanging at Lee’s when who rings his phone but Barbara, from inside Arkham. Jim cuts short the chat with his off-kilter ex, pulling a Beckett (a joke you’ll understand in an hour) and claiming to Lee it was just a telemarketer. Babs immediately calls Lee next and leaves a message on her “girlfriend’s’ machine, expressing a wish that she “die screaming, bitch” — which funnily enough is how my telemarketer calls usually end. 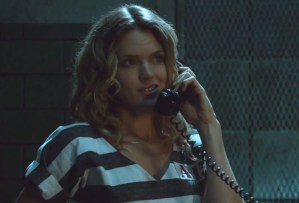 Barbara’s Arkham stint is likewise cut short when “Zaardon” joins her, Jerome et al behind bars, only to keel over and bellow from his belly a knockout gas born of a potion given to him earlier by billionaire entrepreneur/scientist/Chamber of Commerce bigwig Theo Galavan (played by James Frain). Theo’s sister Tabitha aka Tigress (Jessica Lucas) then storms the clink to collect the half-dozen convicts. They later come to inside Theo’s swank digs, where they learn of their host/rescuer’s plan for a united team of brilliant baddies. The group’s self-appointed leader, Richard, asks out of the scheme, and is thusly excused, permanently, at the hand of wild child Tabitha’s whip and blade.

Meanwhile, beneath Wayne Manor…. With Alfred’s expertise, Bruce has blasted open the door to his father’s secret room, inside of which they find a desk and some computers. There’s a note waiting for Bruce, whose name by the way was the keypad code. (D’oh!) The gist of Dad’s post mortem message to his lad? “You can’t have both happiness and the truth. You have to choose,” Thomas wrote, imploring Bruce to “choose happiness… unless you feel a calling. A true calling.” Which obviously is a reference to the Eliza Dushku series (still airing on the MIA Network). Or to Bruce’s fate as Batman.