If you went into Monday’s Castle Season 8 premiere cold/spoiler-free, I’m especially curious how you responded to its unique structure, told as it was solely from the point of view of Rick as he scrambles to process/solve Kate’s sudden disappearance.

The hour started off pleasantly enough, with Rick gifting newly named Captain Beckett with a bit of confection, inside of which was a bracelet engraved with, of course, “Always.”

Soon enough, however, the bauble would come to serve an ominous purpose.

After Kate shrugs off a call from (she claims) a telemarketer, she dashes off to (she claims) 1PP, for a meeting with also-promoted Deputy Chief Gates. Rick, now back working as a P.I., in turn swings by his office, only to learn that Alexis has been taking (and solving) cases for him, ever since her happenstance run-in with a potential client. Alexis gives her dad the 10-cent tour of the office reno, including a tricked-out safe room and a desktop gizmo that spits out a gun (belonging to Chekhov or otherwise).

It is only when Rick gets a casual phone call from RySpo, who can’t seem to reach Beckett, that he begins to get a sense that something is amiss. Especially when the murder scene the boys are working at a theater reveals a pool of Beckett’s blood, with her shiny new bracelet floating in it.

Tracking one of the theater gunmen’s stolen credit cards, Castle & Co. meet Hayley Shipton, a disgraced British bobby who currently is investigating the theft of thousands of Social Security numbers to furnish fake IDs. She at first puts up an ice-cold front, but later shows up at Rick’s office to share the little she knows. That tidbit takes the two to a storage locker, inside of which is a none-too-small arsenal of next-gen weaponry. After Castle irks Hayley by breaking the rule of their tenuous alliance, by texting the cops, they get into a scrape with a female shooter, A.J., who escapes.

Alexis meanwhile looks into the possibility that the mysterious East Indian man Beckett was seen with during an emergency triage session at a dry cleaner is diabetic. That leads her to the ambulance from which Kate stole some insulin, before hopping into a cab to go see… imprisoned William Bracken.

After giving Hayley the Reader’s Digest version of the Beckett/Bracken mythology, 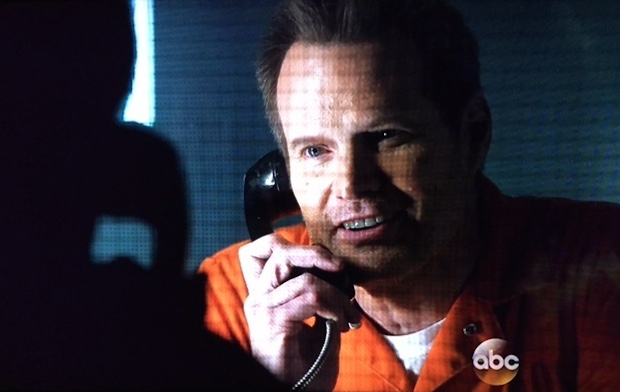 Rick visits the incarcerated politico himself, only to be taunted with the suggestion that he doesn’t know his own wife, that Kate’s obsession with the conspiracy that killed her mother won’t ever die.

On his way out, Castle is apprehended by A.J., drugged and lobbed into a van. At their  destination, Rick is bound to a chair and tortured by A.J.’s partner, Brooks, with spiders, to divulge what he knows about Kate’s recent activities — which is, of course, nada. Castle eventually hulks out and breaks free of his zipties, and a chase ensues. The pair of baddies are about to put Rick down when shots ring out from around a corner, wounding A.J. and scaring off Brooks. Kate, it turns out, was the shooter, though all she can/will say to Rick before eluding the arriving police is “I love you,” punctuated by a warm kiss.

Back at the 12th, the boys get a positive ID on the man Beckett is with — Vikram Singh, an analyst from the same Attorney General’s office in D.C. where Kate once worked. And Kate’s onetime partner, Rachel McCord, can offer no intel on the strange sitch, since she and the rest of their team have been executed in recent days.

Rick and the boys lean on A.J. to play “CYA” and help them out, but she counters that she will be in worse shape if she says a word. In fact, after warning that hers wasn’t the only team after Beckett, A.J. proceeds to attempt to escape custody, essentially sacrificing her life then and there in an extended shootout. Meanwhile, we see Kate (and presumably Vikram) holed up in an abandoned building somewhere, as a pair of SUVs loaded with well-armed baddies pull up to the curb outside….

What did you think of the Season 8 premiere, Part 1?