Your “case of the Mondays” has been rendered irrelevant — at least in comparison to the horror show endured by Jane Doe in the premiere of NBC’s Blindspot.

In the span of one hour, Jaimie Alexander’s protagonist wakes up naked in a duffel bag in Times Square (then emerges face-to-face with a startled male police officer, to make things extra-humiliating), remains totally clueless about her identity, gets into a fistfight with a nasty landlord and takes a bullet fired by a Chinese terrorist.

And I haven’t even gotten to the tattoos.

As I’m sure you’ve learned through NBC’s ubiquitous Blindspot promos, Jane finds herself covered in ink at the outset of the series premiere, a series of symbols, words and numbers that seem to be clues hinting at a larger mystery. The most conspicuous tat of them all, though, is the name of FBI Special Agent Kurt Weller (played by Strike Back‘s Sullivan Stapleton), who becomes something of a protector to Jane in the show’s debut hour. 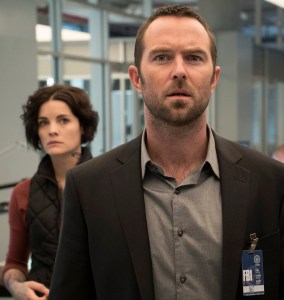 In between the countless interrogations and full body scans, Jane manages to pinpoint one tattoo in particular, which is written in Chinese — a language she recognizes (much to her own surprise). She understands the writing to be an address and a date, and before long, she’s working alongside Kurt and the rest of the FBI to take down a Chinese terrorist with plans to blow up the Statue of Liberty. (In a nutshell: The good guys win. And also, even though everyone seems to think it’s a terrible idea, circumstance keeps dictating that Jane tag along for all the case work.)

But the more intriguing elements of Blindspot‘s premiere are those that offer glimpses into Jane’s past. By the end of the hour, here’s what we know about our leading lady:

* The only tattoo that she actually had before some anonymous weirdo inked her entire body indicates she may have been a Navy SEAL — which would explain the spot-on marksmanship and badass martial arts moves that come out of nowhere.

* Before all of her memories were erased (with a megadose of a drug used on PTSD survivors) and she was stuffed into a piece of luggage, Jane had some kind of student/teacher relationship with an unnamed, bearded man who helped her hone those sharpshooting skills. In one flashback, we see a younger, long-haired Jane completing an outdoor shooting course with the man. In another, we watch as the man inserts a drug into Jane’s veins, telling her she’ll lose her entire identity once he does so. (Her response: “I know. But it’s my only choice.”) The same man is seen following Jane and Kurt as they make their way through New York City on the terrorist’s heels — and I’m willing to bet he had something to do with Ms. Doe’s body ink.

* In an exciting end-of-episode twist, one of Jane’s tattoos — “81899Z” — is revealed to be a case file number… pertaining to Kurt’s boss, Bethany Mayfair, who’s gotten herself into some real legal trouble. (We’re kept in the dark about most of the details, but the words “murder” and “embezzlement” rarely mean anything good.)

But enough from me. What did you think of the Blindspot series premiere? Grade the episode in our poll below, then hit the comments to back up your choice!