You never expect to see Doctor Who‘s titular protagonist pointing anything more powerful than a souped-up screwdriver at his enemies.

Which made the final seconds of the show’s Season 9 premiere all the more startling.

Sure, The Doctor was making a last-ditch effort to save his BFF — sorry, Missy, not you, gurl! — and rid the world of a truly evil power in the process, but you’ll have to forgive me if I wait until next Saturday’s installment before I vote to indict our fearless Time Lord on charges of murdering an adorable, very frightened moppet.

I am, however, willing to declare The Doctor guilty of giving me flashbacks to my one visit to Medieval Times back in the mid-’90s. (I’d reach the same verdict regarding Missy’s Bitchery in the First Degree, but she doesn’t really need the encouragement.)

With that said, let’s recap the action from “The Magician’s Apprentice” in five pithy bullet points:

* The hour opens with The Doctor encountering a boy stuck in a horrifying field of “Hand Mines” — five fingers surrounding a horrible eye that reach up and pull their victims beneath the surface — and shoring him up with the instruction, “Tell me the name of the boy who isn’t going to die today!” But when he learns that name is Davros — his mortal enemy from the future (AKA leader of the Daleks) — he flees the scene, leaving the child weeping in terror. 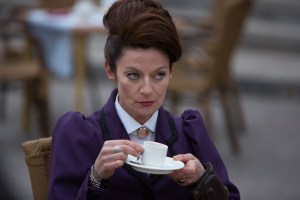 * Many many many years later, a hooded minion — whom we later learn is made almost entirely of snakes — comes looking for The Doctor, with the news that not only is Davros dying but he “remembers.” This prompts our protagonist to send to Missy his will — a metallic sphere that can only be opened upon his death — and leads to a deliciously twisted tea party between the sociopathic (and somehow not dead) villainess and the Doctor’s current companion Clara. (Best line of the hour: Missy to Clara, as an in-love duo walks past with their dog on a leash — “See that couple over there? You’re the puppy!”) But they wind up tracking their Time Lord pal to a medieval court, where The Doctor is amusing himself with futuristic literal-isms like playing wicked guitar solos as part of an “axe fight.” To be honest, the attempts at comic relief in these scenes are laid on heavier than mascara on a Kardashian, but it all ends with the arrival of Davros’ messenger — and Clara’s shocked realization that her buddy’s face is registering (perhaps for the first time?) shame.

* SnakeFace McGillicuddy transports the Doctor, Clara and Missy to what appears to be an ICU unit of a spaceship where Davros lays dying — but it turns out, it’s just a building on Skaro, home planet of the Daleks. The Doctor winds up posing a vital question: How scared do you have to be to seal your people inside tanks? But the answer is a brutal one — as scared as a child abandoned to die in one of the worst places in the known universe.

* Turns out, Davros’ plan is to kill Clara and Missy, kill The Doctor, and destroy the Tardis (which has been procured by those good medieval folks, or rather, Daleks in disguise). When Clara declares the Blue Phone Box-shaped time machine is indestructible, she gets a valuable pearl of wisdom from Missy: “Did The Doctor tell you that? Because you should never believe a man about his vehicle.” Before long — and much to The Doctor’s horror — the Daleks zap Missy, and then a frightened Clara (her sprint to save herself dubbed “life at its purest,” by Davros) — into oblivion. “Compassion, Doctor, it has always been your greatest indulgence,” hisses Davros, victorious at last. 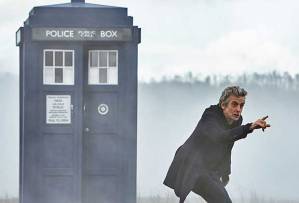 * Or is he? In the final moments of the episode, The Doctor returns to that damnable Hand Mine field, where young Davros is still crying for help. “I’m from the future,” says The Doctor, who then lifts his weapon and points it at the sweet-faced little fella. “I’m gonna save my friend the only way I can: Exterminate!” It’s a doozy of a denouement – putting the Dalek’s battle cry that we’ve heard hundreds of times now into the mouth of the man who is forever trying to stop them, without succumbing to their ways. Surely, next Saturday’s hour, “The Witch’s Familiar,” will un-kill Clara and Missy, and reveal a hitch in The Doctor’s plan that doesn’t involve actually pulling the trigger, but until then, it’ll be a tense seven days of waiting.

What did you think of the Doctor Who Season 9 premiere? Take our poll below, then sound off in the comments!