When onetime Neighbors neighbor Toks Olagundoye was added to ABC’s Castle as a series regular for Season 8, the Internet did what the Internet does — theorize the most pot-stirring purpose for her character, Scotland Yard castoff-turned-“security specialist” Hayley Shipton.

In other words, some speculated she would get too cozy with Nathan Fillion’s Rick — with whom she (reluctantly) partners during the two-part season opener (kicking off Monday at 10/9c), when Beckett (Stana Katic) goes missing — or at the very least draw eligible Esposito’s ever-wandering eye. But as part of her TVLine Q&A below, Olagundoye makes one thing refreshingly clear: Hayley is here to bring the sass, kick some ass and maybe mentor a lass. But romance? No one has time for that.

TVLINE | How was the role of Hayley presented to you by the producers, how was she described?
Well, she wasn’t described by the producers to me. I got the sides for an audition, and there’s a breakdown that describes the character. When I got [the role] I figured, “They liked it, so that’s what were going to do.” So yeah, I stayed really true to what I did that first audition, keeping her sassy and relaxed and confident.

TVLINE | Were you prepared for the physicality of the role?
Absolutely. I was an athlete, I’ve always been very active. I run, I do pilates, yoga, cardio barre…. I have a lot of training for stage combat, for when you don’t have the stunt people. And I enjoy all of that. So it was a nice surprise that not only was there so much physical stuff but that I was allowed to do it.

TVLINE | You have a pretty brutal throwdown with guest star Daisy Betts’ character, outside some storage units….
I had so much fun with that — it was such a good time! Daisy is just lovely, and with my stunt double and her stunt double, the four of us had such a good time on it, learning the choreography. [Director] Rob Bowman likes to really get into it so he makes it really challenging, because he wants it to be perfect, but I love that. I love it when they’re like, “Again! Again! Again!” because I want it to be perfect. I got kind of banged up, but I was proud of my bruises. [Laughs]

TVLINE | How would you describe Hayley’s dynamic with Mr. Richard Castle?
You know, Hayley’s an interesting sort — her dynamic doesn’t really change with anyone. She’s her own brand of sassy and sarcastic. She’s witty, she doesn’t put up with nonsense from anyone…. She doesn’t speak unless she has something to say, and she’s pretty much that way with everyone.

TVLINE | Thought she does seem to have a soft spot for Alexis. Why do you think she takes a shine to her?
I think she’s impressed with her. Not in a way like, “You’re my hero,” but Hayley has always been hardworking and disciplined and focused — No. 1 on her plate is work and getting it done. She’s not really concerned with personal relationships. I don’t think she’s used to being impressed by anyone, but this young woman has just got it so together and is so focused, but also has no ego. That’s a lovely thing about the Alexis character, she’s so capable and smart but she has no ego. I think Hayley enjoys that, and she enjoys giving her something that she probably 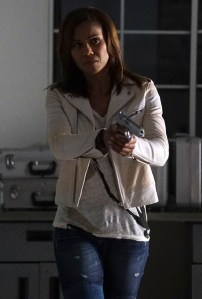 didn’t have when she was younger, which is guidance from another strong female.

TVLINE | In Part 1 of the premiere, at least, Hayley is very secretive, she’s not exactly helpful to the good guys…. How might we eventually warm up to her?
I don’t know. [Laughs] I don’t know. It’s different for everyone. If people warm up to her, they do, and if they don’t, they don’t.

TVLINE | What else do you know about her backstory? As revealed in the premiere, it sounds like she had obviously a very different upbringing from your own.
The producers have an idea of what they want for an arc, but they’re fluid with it because… you have to be able to change things according to what’s actually going on and how people are responding. I know they have a couple of ideas but I know that they’re not solid, so it’s not something that I would share.

TVLINE | When I spoke to the showrunners last month, they affirmed they were in no rush to point Hayley at anybody romantically. They said that’s not what this character is about.
Honestly, I would have resented, after 21 years as an actor, to be brought on a show simply to be somebody’s romantic interest. [Laughs] It’s not a soap opera. So I like the fact that work is No. 1 on her plate; you shouldn’t have time for anything else. I mean, she’s flying between countries, for God’s sake, to get her work done! [Laughs] I do like showing, “Yeah, there are women in this world who aren’t just looking for guys.” It’s kinda cool.

TVLINE | Lastly, what are you at liberty to say about how the show will keep Hayley around beyond the two-parter? I can’t imagine she’s joining the NYPD or anything…. It seems too regimented a job for someone like her.
Yes, and she was kicked off the force in England, so I don’t know if anyone would be too quick to have her back! The police officers are very proper over there, and what she was doing was a bit more “1970s New York cop.” She was unorthodox.

TVLINE | I’m curious to hear the story behind her dismissal. Maybe they’ll fly you all to England someday for a location shoot!
I’d go!