It ain’t easy living in Graceland.

Just last week on the USA Network drama, de facto team leader Paul Briggs (played by Daniel Sunjata) was shot in the leg by one roommate and slugged by another, after his Machiavellian manipulations and super-secretive ruses put his pals in jeopardy again and again.

Briggs is even at the root of comparatively mild-mannered Dale Jakes’ (Brandon Jay McLaren) new dilemma, seeing as the ICE agent “peeled off” some greenbacks during his latest bust, to serve as “get gone” money should “sin eater” Briggs need it.

With the Season 3 finale arriving Thursday at 10/9c, TVLine invited series creator Jeff Eastin to account for Briggs’ bravado and preview the final twists to come.

TVLINE | Graceland roommates are shooting and punching each other, Briggs’ secrecy has led them to fatally stab marks in the living room…. Why didn’t Briggs just spell out his whole plan for Martun from the get-go?
Briggs’ plan really began in Episode 5, coming off of Colby’s death, and at that point all the roommates had pulled away from him — partly because of his personality. And as a more practical matter, he didn’t really believe the roommates would go along with the plan. Also, Briggs has a sort of history of “the end justifies the means,” 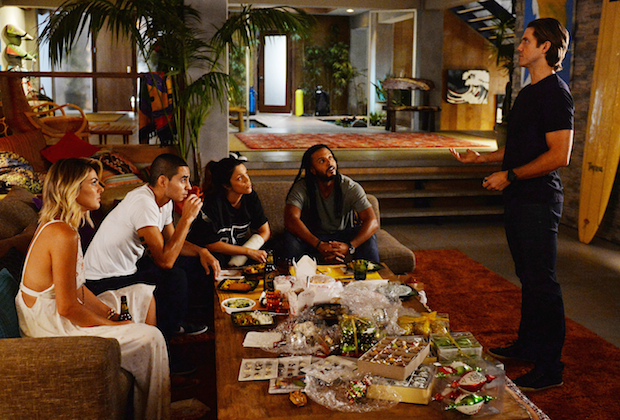 so he realized that Mike had come off of this near-death experience and he could use that.

TVLINE | He figured he had a better chance of compelling the roommates into action as cops versus accomplices in a ruse.
Right. Which essentially at the end of the day protected Briggs but didn’t necessarily protect everyone else. We based a lot of this [Sarkissian storyline] on the Whitey Bolger case and the agent who ran Whitey, so we said, ‘OK, what does he have to do [to get out of this]?’ And our advisors said, “Well, if Homeland Security came in and clamped down on domestic terrorism [charges], then all that [‘sin eating’] gets wiped away, so we all went, “Well, that sounds cool.”

WATCH AN EXCLUSIVE SNEAK PEEK, THEN READ ON FOR MORE

TVLINE | Turning to Jakes’ dilemma, I can’t imagine what the next words out of his mouth will be. Courtney (Annie Ilonzeh) is there by the bed, she’s found all the money he hid under the mattress….
Jakes’ relationship with Courtney really becomes a central issue in the finale. The moment when she is standing there with that money, Jakes has a few choices. He can either tell her the entire truth, he can tell a partial truth, or he can flat-out lie. I’ll just say that becomes a central tenet for Jakes’ in the finale, and it also — knock on wood, if we get a Season 4 — will become one of the central issues next season.

TVLINE | That was a bold swing he took, pinching that money for Briggs. Will we learn more about why exactly Jakes owes Briggs this favor?
We’ve sort of teased since Season this idea that Jakes owes Briggs, that there’s the favor owed, and in the finale we finally discover what that secret is. And I’ve got to say, I think it’s actually better than the hype — and I hope people agree with me. I think we did a pretty good job.

TVLINE | Lastly, what are we going to do about poor Gusti? He’s a criminal on some level, yes, but he’s been roped into this whole domestic terrorism thing. Have we seen the last of him?
One of the things I was really happy about this season is that Dan Shattuck, who is my No. 2, and I sat down with the rest of the writers to come up with something that was hopefully compelling and at least for us very coherent, very connected. People have asked, “Did you ever intend to really kill Mike?” And the truth was we hadn’t, partly because what we were looking for a way to take Mike Warren, who really was this “boy scout,” and kind of make him do a 180, with his drug addiction and things like that. Within that, we also loved this idea of Mike coming back [from the “dead”] with these particular thoughts on whether or not he had seen something, whether he’d been given a mission….

The nice twist I thought was the fact that Briggs capitalizes on that. Mike even says at one point, “I gave Briggs a map to my mind,” so we have been driven, since the end of last year, to create that moment. What could we have Briggs do to manipulate Mike? What would be the most he could manipulate him? What if he actually tapped into his “mission from God” and said, “Guess what, I’m god of your world now, Mike. I will control you.” And the idea with Gusti was for Mike to have someone to save. We were really, really lucky to cast Mahedi [Rakib]. I felt we really got the guy we wanted for that role, and he did an excellent job. Off of all that, what we wanted to do was show that Mike, beyond what Briggs manipulated, really did have a purpose. And toward that, yes, Gusti will be in the finale.