The following contains spoilers from the Season 3 finale of USA Network’s Graceland.

In the wake of the Homeland Security sweep that nabbed Martun Sarkissian on a domestic terrorism rap, Briggs & Co. came to realize that the only loose end in selling the bust to Special Agent Logan was Ari, who knew exactly all that had transpired in recent weeks.

Jakes, meanwhile, had serious second thoughts about the $9 million he had “peeled off” for Briggs, once it became evident that do-right Mike was poised to come clean to their bosses about their assorted transgressions.

Here, show boss Eastin answers some burning questions as well as gives a taste for what Season 4 might look like — if USA renews the edgy drama.

TVLINE | I would argue that Ari’s execution was the biggest line this team has ever crossed. Would you agree?
Yes. Yes. And it’s probably the most obvious line they’ve crossed.  From the beginning of the season, when Briggs was made the “sin eater,” we hoped Ari would really pop as a character –and I gotta say, he was probably the hardest character I’ve ever had to kill; Rhys [Coiro] did an amazing job of making this reprehensible guy really interesting and a lot of fun. But we had him do some of the most horrible things we ever had a character do — taking a  kidney, throwing a guy off a bridge, chopping off heads…. He was pretty despicable. In the end, they were able to take down Martun, Homeland Security came in, so the only loose end for Briggs and for the team was Ari. You can see, the idea was to flip the team. Charlie is not in favor of it, Paige swings from “We can’t do this” to “Ari can’t walk out of here.” We end the season in this fractured place where Briggs has without a doubt crossed a very, very dark line.

TVLINE | Was there any discussion in the writers room 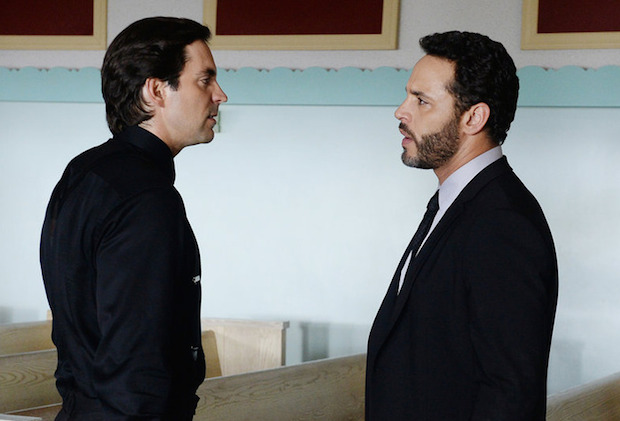 a la “Maybe we have Ari reach for a knife in his back pocket,” or maybe he lunges at Briggs, to make it a smidgen self-defense-y?
No, not really. It was always cold-blooded. There’s a bit of Briggs describing it as self-defense, but I think that was more just the two guys talking. We played with different versions of how that final moment would happen, but a thought-out execution seemed most appropriate for what we built to.

TVLINE | Which brings us to the question: How does Jeff Eastin want us to feel about Briggs? And characters such as Johnny and Paige, who ultimately supported him in this execution?
Conflicted. My other show, White Collar, was a fun, “blue sky” show, but we went into Graceland with the idea of making a show that was very edgy and provocative. I take a lot of lessons from [Breaking Bad creator] Vince Gilligan….

TVLINE | But we liked Walter White.
Right. And [writer/producer] Dan Shattuck, my No. 2, is often fond of saying there’s a huge difference between likable, relatable and watchable. And I would argue that perhaps Walter White isn’t likeable or relatable even, but he’s infinitely watchable. And that’s what we want to do with these characters. Briggs may not be that relatable either, but I’m hoping he’s very interesting and watchable.

Other characters, like Mike and his journey this year with the drugs, I’m hoping can be relatable. I lost somebody very close to me who died of a drug overdose, so that inspired a lot of the stuff with Mike. Johnny has always been a bit of conflicted character who wants to believe Briggs is a good guy but can’t. Brandon [Jay McLaren] is one of the best actors I’ve ever worked with so it was nice to finally give Jakes something meaty. I know that last year, based on what I saw online, people hated Paige and we tried to redeem her this year and I think ultimately she turned out to be a more interesting character; her stuff with Toros was very watchable. So be as conflicted as you want about the characters, but hopefully you’ll keep watching them.

TVLINE | Among the roommates’ reactions: 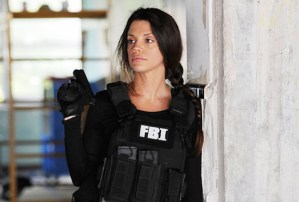 If I’m Charlie, I’m transferring out of the house at this point. I’m not there for Season 4.
You may not be in the house but you’ll probably be in the season. [Laughs] Those are the bigger questions. Assuming we do get a Season 4, which we’re hopeful about, there’s some really cool story stuff that we really want to do. There’s a song at the end of the finale, one shot on Briggs’ face, that may give you a hint on who would be the final person remaining in Graceland if everybody else can’t be. The question is: What happens to Jakes and Courtney? Johnny has now taken a shot at Briggs, can that [friendship] ever be repaired? And like you said, Charlie has essentially been witness to an execution, so can she and Briggs ever get to a [better] place? But could Walt and Skyler ever be redeemed? I used to think that was an impossibility but I don’t think anybody is completely irredeemable, especially on TV.

TVLINE | You gave us the beginning of the Jakes/Courtney conversation on the couch. What did the rest of it sound like? What all has she signed up for?
That is one of the big keys in Season 4. I wish we had a bit more time in our finale to touch on it, but what we started realizing is there’s a lot more to Courtney than we know right now. She’s a lawyer, she has a lot of bad clients, but going into Season 4 — hopefully — we will discover a lot more about her and that particular conversation. From the voiceover and the later conversation, you get the idea that Jakes isn’t even sure. He takes that money because he thinks Mike is going to turn him in, and he doesn’t want to spend the rest of his life in jail. He just happens to have this beautiful woman with him. What is his plan? Stay tuned.

TVLINE | Before we go, you must confirm: Did Brandon really cut his dreadlocks?
He did. That is something Brandon has been talking about since the day I met him. He grew them out for 15 years and that was him shaving them off, live on camera.

TVLINE | See, that’s big, because when I think of Brandon Jay McLaren, one of the things I think about is his hair.
He definitely tears up [in the scene]. I asked him about it afterward and he said, “Yeah, I feel a whole lot lighter.” It was a big decision for us, too. We spent a lot of time trying to decide — can we do this? We didn’t want to have a Felicity moment on our hands!