A tip of the hat to the Republican National Committee for limiting the main stage of its second 2015 Presidential Debate to 11 candidates — and not allowing one more of its four lowest-polling hopefuls to escape the kids’ table. What better way to avoid “12 Angry Men” headlines on Thursday morning featuring Celebrity Apprentice head judge (and current front-runner for the nomination) Donald Trump at his sneering, puckermouthed best/worst?

In all seriousness, though, the GOP’s second showdown of the 2016 election cycle proved far more combative in tone — and included a lot more “Whoa, nelly!” zingers — than its August predecessor.

Former Hewlett-Packard CEO Carly Fiorina and former Florida Gov. Jeb Bush came out swinging especially forcefully — while Donald Trump drew some of the biggest laughs with particularly outlandish insults.  Meanwhile, moderator Jake Tapper, along with colleagues Dana Bash and Hugh Hewitt, carried out the challenging task of giving all 11 candidates a chance to speak — just not all at once.

And so it is that TVLine is covering the second Republican debate of the 2016 presidential race with an eye on water-cooler soundbites, “Oh no he/she didn’t!” punches and anything resembling luxury vehicles careening into guard rails. With that said, let’s count down the telecast’s most memorable moments:

* Former Arkansas Gov. Mike Huckabee won the prize for best pop-culture reference by declaring he and his fellow GOP comrades as “the A-Team” and labeling Trump as the candidate who “doesn’t mind saying ‘you’re the fool.'” (It’s “pity the fool,” but we’ll let it pass.)

* Florida Sen. Marco Rubio most resembled a tragic Veep character when his opening-statement joke — “I am also aware California has a drought — and that’s why I made sure I brought my own water” (accompanied by him bringing out his H20) — was met with only a dozen or so laughs. (Dude, don’t remind us about your Water-tastrophe of 2013!)

* Retired neurosurgeon Ben Carson’s opening remarks came thisclose to quoting Whitney Houston’s “The Greatest Love of All” by declaring himself “very concerned about the future of our children.”

* Wait, was New Jersey Gov. Chris Christie conjuring up some antiquated “the black guy is a criminal” reference by declaring President Obama has “stolen [the concept of American children having better futures than their parents] from us, and when I’m president, I’m gonna take it back!”? (I kid, I kid… OK, maybe I don’t kid entirely.)

* When Kentucky Sen. Rand Paul sniped about Trump’s “junior high” style insults, the businessman shot back: “I never attacked him on his looks — and believe me, there’s plenty of subject matter right there.”

* When Tapper mentioned former N.Y. Gov. George Pataki’s criticisms of Trump in the “kid’s table” debate, Trump did not hold back, labelling him a “failed governor,” then adding, “He wouldn’t be elected dogcatcher right now!”

* Wisconsin Gov. Scott Walker, who failed to make much of an impression throughout the night, scored a few laughs when he took a dig at Trump and Obama in the same sentence: “We don’t need an Apprentice in the White House — we have one right now!”

* About 20 minutes in to the debate, Ohio Gov. John Kasich noted that if he were a home viewer watching the potential Republican candidates engage in pointless back-and-forth, “I’d be inclined to turn [the debate] off.” (A lightbulb moment: Maybe Kasich should moderate the next debate? I kid? I kid?)

* When Bush got testy with Trump about how he managed to lure Democrat Hillary Clinton to his wedding, The Donald sarcastically observed, “More energy tonight — I like that!”

* Fiorina boldly declared if she’s elected president, she “wouldn’t talk to [Russian President Vladimir] Putin at all” — but rather, rebuild missile defense, revive the Sixth Fleet, provide intelligence to Egypt, give weapons to Jordan and arm the Kurds.

* Huckabee huffed that President Obama treats the new Iran nuclear deal “like the Magna Carta — the Iranians treat it like it’s toilet paper.” 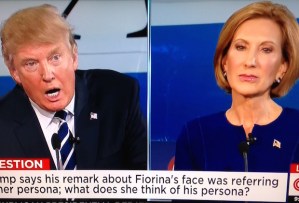 * Inexplicably, the moderators took time to ask Fiorina a question about Trump criticizing her face. “Mr. Trump said he heard Mr. Bush clearly in what Mr. Bush said,” she shot back, referencing Bush backtracking on his comments about defunding women’s health. “I think women all over this country heard very clearly what Mr. Trump said.” (Fiorina seemed deeply unamused when Trump followed up by calling her “beautiful.”)

* Bush got particularly heated in his response: “To build a wall and deport people — half a million a month — would cost hundreds of billions of dollars, Donald — hundreds of billions of dollars — and destroy community life, tear apart families, and it would send a message to the world that the U.S. values that are so important to our long-term success no longer matter in this country.”

* Rubio scored his biggest win of the night in discussing his family’s own immigrant background against Trump’s criticism of Bush occasionally answering questions in Spanish. “My grandfather instilled in me the idea that I was blessed to live in the one society in human history where even I — the son of a bartender and a maid — could aspire to have anything and be anything that I was willing to work hard to achieve. But he taught me that in Spanish.”

* Christie turned up the negative rhetoric about Clinton by insisting “I will prosecute her during those debates.”

* Responding to Rubio’s criticism that during a recent radio interview, he appeared uninformed about specific enemies to the U.S., Trump seemed unperturbed. “There are few people anywhere – few people anywhere — that would’ve known those names!” Rubio, however, pressed on that despite Trump’s argument that he’d surround himself with the “finest” team, “a president better be up on those issues in his first day or her first day of office.”

* Did I hallucinate or was there a whole prolonged riff about John Roberts being way too liberal a member of the United States Supreme Court? 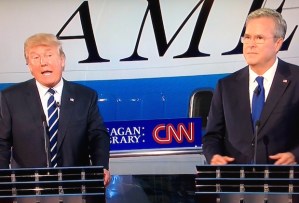 * Bush got super testy when his brother George W. Bush’s record was called into question. “One thing I know as it relates to my brother,” he seethed, “He kept us safe!”

* We can all agree the debate would’ve been a lot more fun if CNN had substituted the voice of all Peanuts adults — “maw maw maw maw maw” — every time Huckabee opened his mouth, yes? Then again, we’d have missed this whopper of a comment: “The most dangerous person in any room is the person who doesn’t know what he doesn’t know.” Mike, dude, stay in the race at least til the mid-point of SNL‘s upcoming season, OK?

* Also, did I hallucinate that the one woman on stage, Fiorina, had to interrupt forcefully in order to be allowed to weigh in on the very lengthy discussion about the use of U.S. military force? “We need 50 Army brigades, 36 Marine battalions, 300 to 350 naval ships,” she said, as Tapper attempted to cut her off, “We need to reform the Department of Defense, and take care of our veterans so 307,000 of them aren’t dying waiting for health care!”

* Paul, arguing that the U.S. war on drugs “has had a racial outcome” and should be relegated to the states, insisted some of his rivals were hypocrites since they’d probably used marijuana in their teens. “If we left [the question] open, we could see how many people smoked pot in high school.” Bush, then, admitted his own marijuana use 40 years ago, excusing some of his rivals for not wanting to make the same confession in front of 25 million viewers. “My mom’s not happy that I just did,” he added.

* Fiorina referenced her own child’s death from drug addiction while agreeing with Paul that U.S. drug laws are problematic in an era when “two third of people in our prisons are there for nonviolent offenses.”

* Carson rambled incessantly when asked if Trump should stop correlating childhood vaccines with autism — but I’m pretty sure he was saying that “numerous medical studies” have disproven Trump’s theory that children who’ve received shots “meant for a horse, not for a child” immediately developed the disease.

* Everyone watching was wondering “HOW IS THIS DEBATE NOW IN ITS THIRD HOUR?” when Tapper started asking the candidates which woman they’d put on the $10 bill and what they’d want their Secret Service code name to be if elected President. (Fiorina’s choice of “Secretariat” was best, but Bush’s “Ever-Ready” proved funniest after he reminded Trump, “It’s very high energy, Donald!”) Worst answer in the “lighthearted” sequence? Huckabee saying he’d put his wife’s face on U.S. currency for putting up with him, and then adding, “that way she could spend her own money!” (Ummmm…buddy…Beyoncé has been paying her own automobills since 1999!)

* “We’ll kill the terrorists, we’ll repeal Obamacare and we’ll defend the Constitution — every single word of it!” said Cruz, when asked to sum up his platform. Ugh, sorry, I failed in my previous recap promises.

What did you think of #GOPDebate No. 2? Who were the big winners? Who fell behind? Sound off in the comments!