The 10 remaining acts in America’s Got Talent‘s 10th season have spent nearly three months pouring their blood, sweat and (in some cases) contents of their stomachs into the competition — and in a few hours (9:57/8:57c-ish) , a victor shall be crowned.

But before the winner is revealed, let’s take a look at the 10 remaining hopefuls:

* Oz Pearlman, the mentalist — no not that mentalist — has a pretty decent shot at the Top 5.

* Uzeyer Novruzov, the ladder acrobat, barely escaped elimination last week. (Thanks, Dunkin Donuts!) Talented though he may be, I expect him to be eliminated early in the night.

* Benton Blount, whose covers of songs like “The Story of My Life,” “Jolene” and “Fight Song” have wowed the judges all season, probably won’t win it all — but you can bet someone will give him a record deal, and rightfully so.

* Gary Vider, one of several comedians left in the competition, was the most recent recipient of the coveted Judges’ Choice honor. Despite lacking a hook — see Piff the Magic Dragon and Drew Lynch, below — Vider has proven himself a stand-up (…) guy, and although I don’t suspect he’ll win, I do expect to see him elsewhere in the future.

* Piff the Magic Dragon, the magical comedian, recently launched his adorable sidekick Mr. Piffles — aka the “World’s First Magic Performing Chihuahua” — from a cannon. That momentary lapse in judgment aside, he’s my personal favorite to win. (Side note: Piff might have merely launched a robot version of Mr. Piffles last week; like I said, this guy’s a magician.)

* Paul Zerdin, the only ventriloquist in the bunch, has been a consistent crowd pleaser, thanks to his rotating cast of characters. But is he the next Jeff Dunham? Honestly, I don’t feel comfortable guessing where Zerdin will land in the finale; he’s kind of a wild card.

* The CraigLewis Band, a solid R&B duo though it may be, isn’t one of my picks to win. That said, you can’t beat this kind of exposure, so don’t say goodbye to these guys just yet.

* Derek Hughes, yet another comedic magician, has developed a solid rapport with the judges over the course of the season. That said, I’m predicting he’ll find himself in the Bottom 5 when all is said and done.

* Stevie Starr, the “Professional Regurgitator” — yes, that’s now a thing to be celebrated — has left stomachs churning and thumbs tweeting since his first appearance. (Needless to say, if he does win, his Las Vegas show won’t include dinner.)

* Drew Lynch, the comedian who captured America’s hearts with his adorable stutter, is a favorite to win — though, admittedly, not a personal favorite. (Don’t hate me. We all have our preferences.)

Browse the 10 finalists in our gallery below, then vote for your favorite to win (plus who you think will win, since we know they’re not often the same). And while you’re down there, feel free to drop a comment with your reasoning. 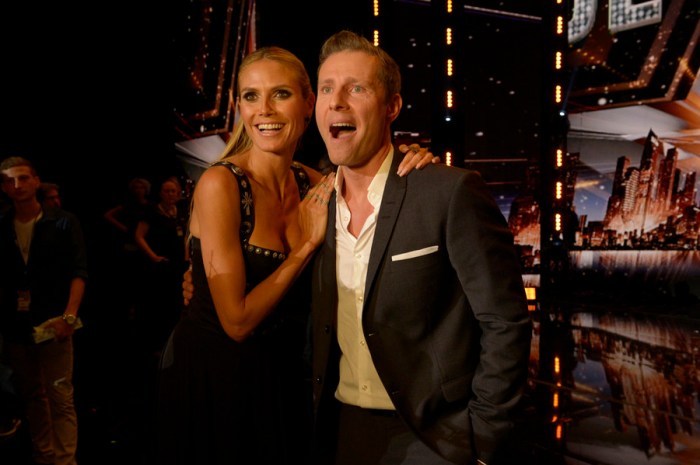