In the wake of Zoo‘s plane crash, two team members found distinct ways to cope with the “death” of a third, while the others were still very much invested in the fight against the animals. By the time the season finale came to a close, who had reunited for the cause — and what significant obstacle literally stood in their way?

The good news in the above is that Jamie is not actually dead, but only presumed so, having been found and nursed back to health by Anik, a strange man holed up in a remote, secure cabin. First chance she was able, Jamie made a run from her “captor,” only to realize he was protecting her, from scores of infected animals beyond the yard’s fence.

Back in the States, we realize that several months have passed since the crash, during which Mitch has drowned his sorrow (often) in booze, while Abraham has joined up with a band of armed “escorts” who transport well-paying clients from Point A to Point B, while fending off any rampant beasts.

Jackson is teetering on the edge of sanity, it would seem, recording journal after journal about the problem in distributing the cure, if it were to be recreated. (Using an aerosol a la The Last Ship won’t fly in this reality, since the cure would decompose in the atmosphere.)

Though a happenstance run-in at a convenience store gives Jackson the idea to disperse the cure using mosquitoes, the issue may be moot, seeing as the last, uninfected leopard in Zambia, once finally tracked and captured, is discovered to have migrated onto Reiden-owned, tainted land, and thus is a help no more. In lieu of the cure, Reiden has sold the government on a plan to kill every animal on Earth, and then “regenerate” the population within 10 years.

Gradually in the final hour, the team reassembles — starting when Abraham’s job escorting a man who takes them to a speakeasy for meat-lovers sheds light on what truly matters in this crazy thing they now call life. “These are not the days to retreat from those you care about” as the big guy has done since the crash, he tells Jackson. Rather, people should do the “opposite.”

As for the cure conundrum before them, Abraham posits, “We find whatever is the next leopard, the next solution.”

And, it turns out, Jamie still has that next leopard, wherever she is. “Posivak,” as her leopard cub has been dubbed by Anik, is a wee critter no more, and is living peacefully in a pen on the premises. When Anik finds Jamie a phone, she calls Mitch, who at first disbelieves it’s truly her. But soon enough, 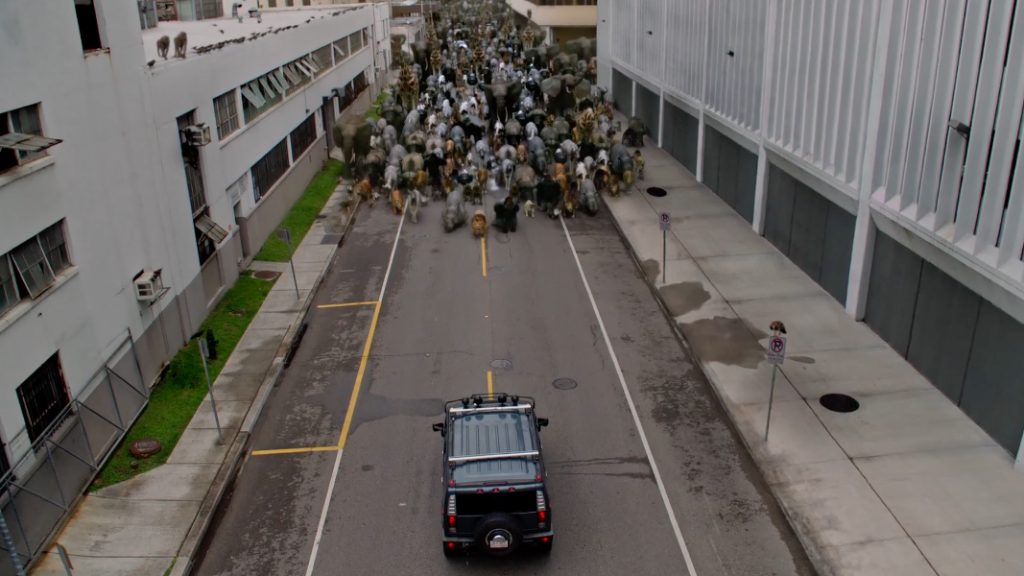 relief washes over his face, reconnecting with the woman he’d grown so close to just before the crash.

Mitch then reunites with Jackson and Chloe, and they hop into an SUV with Abraham — only to discover en route to their 18-hour boat trip that seemingly every animal of every stripe (and spot) has congregated in the street before them. And as the team mulls their next move, the hairy mob begins charging at them, as Season 1 cuts to black….

What did you think of CBS’ Zoo? Does it deserve a Season 2?