In the first half-hour of The Mindy Project‘s fourth season, Dr. Lahiri found herself married to a reality TV producer (played by Joseph Gordon-Levitt), wearing a diamond ring visible from outer space and living in a house that you might expect to see on MTV Cribs.

And yet, none of those fantasies-come-true could compare to Mindy’s real-life circumstances: She’s not only pregnant with Danny’s baby but engaged to him by the end of the season premiere.

That’s right: After traveling to India to pay Mindy’s parents a visit (and sabotage their efforts to set up an arranged marriage for their daughter), Danny returned to NYC willing to give the whole ’til-death-do-us-part thing another try.

Still, if you’re a Mindy fan who thinks things are going a little too well for the show’s central couple, executive producer Matt Warburton promises Mindy and Danny’s relationship won’t go stale now that they’re engaged (and, in a few episodes’ time, raising a child).

“The audience had the same worries when we got Mindy and Danny together,” Warburton tells TVLine. “Like, ‘Well, now that they’re together, what are they going to talk about?’ And it’s only added more fun to the show. The great thing about Mindy and Danny is they will never, ever, ever run out of things to fight about.”

In fact, the more picture-perfect Mindy’s life seems to become, the more problems she will have on her plate, according to Warburton. 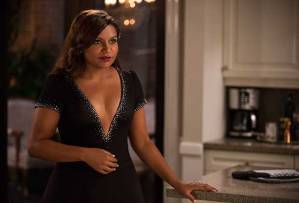 “Part of the problem is, she has everything she’s ever wanted, all at once. It’s really hard to balance all that,” he teases. “Early on, she meets Eliza Coupe’s character who is a cool friend, and she’s like, ‘Why couldn’t I have had a cool friend before I had a baby? I don’t even have time to hang out with this person.’ There’s not an element of her life where we’re not going to throw her a curveball.”

And even though Dr. L and Dr. C are getting hitched, don’t expect Mindy to become a bridezilla anytime soon. Series star Mindy Kaling says the upcoming episodes will “touch upon” the wedding planning process, but “Mindy is still the same person. I cynically think that nobody really changes that much, but people can stretch a little bit if they find someone they love and want to spend time with. In our show, that is where we’ve found a lot of comedy. We see [Mindy and Danny] stretch.”

As for the introduction of Baby Castellano, Warburton admits with a laugh that infants tend to be “TV poison,” but he’s certain that Mindy and Danny’s newborn won’t prevent the couple from having adventures outside parenthood.

“I used to work on The Simpsons, and one thing we realized is you never worry where Maggie is,” Warburton recalls. “This is a nice family, they love each other, they have their crazy adventures and you assume that everyone’s being taken care of.

He continues: “We found that, in making these episodes of The Mindy Project, if you don’t see the baby in a scene or an episode, you know that it’s OK. You can follow Mindy on an adventure of work or in her personal life, out and about in Manhattan, and you’re just not worried about it. It’s only been positive.”

Mindy Project fans, what did you think of the Season 4 premiere — and Danny’s proposal to Mindy? Grade the episode via our poll below, then hit the comments to back up your choice!