The way CBS’ NCIS left things, Leroy Jethro Gibbs was down, but he is not out. (Spoiler alert?)

That said, the man who just barely survives the shooting at the hands of a young terrorist recruit may not be the same one that we, Tony, Ducky et al have gotten to know so well over the years. With the Season 13 premiere fast approaching (on Tuesday, Sept. 22), TVLine presents the bulk of our Fall Preview Q&A with Gary Glasberg, the showrunenr behind TV’s most watched drama.

TVLINE | OK, but this is. [Laughs]
I’m not going to try to tell you that Gibbs isn’t coming back. Gibbs is coming back. But he goes through a really traumatic experience in this that changes him. We pick up right where we left off, and he’s rushed into surgery on an aircraft carrier, where we hook him up with a surgeon played by Jon Cryer (Two and a Half Men). The whole first half of the show is this emotional roller coaster ride of Gibbs’ surgery and with this new character. 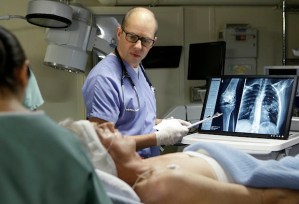 I was a huge M*A*S*H fan when I was a kid, and I think there are many similarities humorwise in the type of work that we do on NCIS, so I really wanted to create this homage to the kind of writing that was done on that show, with Jon’s character — and Jon really delivers. At the end of it, he and Gibbs have established this doctor/patient bond, and in Gibbs going through this we’re going to see a more emotionally accessible Gibbs. We’re going to see some changes in Gibbs that are going to throw people a little bit. [Mark] Harmon is really doing some fantastic work right now in just little subtle nuances and changes. Physically you’re going to see changes. Emotionally you’re going to see changes. Things that you wouldn’t normally associate with Leroy Jethro Gibbs are going to happen.

TVLINE | I was going to ask: What were Mark Harmon’s hopes and wishes for the storyline?
My goal 13 seasons into a show is to give him something fresh and different and new to work with. By going through this sort of life-altering moment, it changes Gibbs’ perspective on the world. You have this very old-school view of what his job is and what being a federal agent is about, and then you end up getting shot and seriously injured by a 12-, 13-year-old kid. That in our mind changes everything.

TVLINE | Michael Weatherly told me there’s a “fundamental” and “tonal shift” for the series.
I don’t know if it at the end of the day affects the entire series, but it certainly affects the way that Gibbs is working with and responding to his team. It’s not a question of his caring for them — they’re his family. 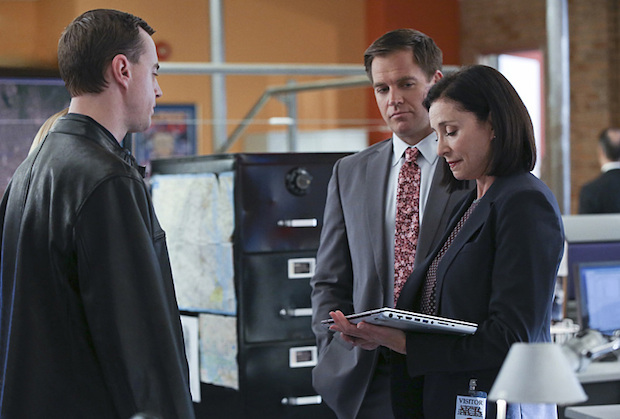 But he now has this question in his head of: As the world changes and evolves, can he continue to protect his team? Is his team ready for this kind of adversary? Is it ready for this kind of fight? And how many more lives does Leroy Jethro Gibbs have? If something were to happen to him, if he didn’t make it through as he’s going to this time, is there someone in line who’s actually prepared for what the world has to offer? That’s going to trickle down to Tony, where Gibbs and Tony are having tension and Tony’s really struggling with trying to understand where Gibbs is headed. There’s a lot of complex character stuff going on with everybody as Tony sort of looks at things and says, “Do I want to be you?”

TVLINE | Until Gibbs is 100 percent, is DiNozzo the guy who steps up most?
He does step up, in the first episode especially, when he takes the reins and runs off to Shanghai with Mimi Rogers (as CIA Officer Joanna Teague). They go after Daniel Budd (played by Giles Matthey) and they sort of wrap up this Calling story, but then he comes back and Gibbs is hard on him. Gibbs is looking at the world a little differently and sees things a little differently. McGee, too, has matured and stepped up and become a qualified, mature agent. Bishop will continue to evolve and faces a bunch of stuff with her personal life and her husband that will then trickle down and sort of change who she is as an agent as well.

TVLINE | Regarding the Gibbs/DiNozzo conflict, is it that one of them thinks Tony’s ready and one of them doesn’t?
Well, I think it’s more than that. [Tony] had an opportunity to have his own team years ago, and he turned that down in order to stay with us. At this point, seeing what’s happened to Gibbs, seeing what’s happened to his world, Tony can’t help but look at things and say, “Is this what I want? Is this who I want to be?” We’re putting together a really significant case later in the season that’s going to sort of bring all this to a head. So is there an arc for the Tony/Gibbs relationship and Tony’s place in the team? Yes. It’s going to continue to evolve and Tony’s going to really get wrapped up in something that I think is going to surprise people.

TVLINE | Something interesting that Brian Dietzen said to me was that Jimmy’s going to have a conflict between his friendships and his professional obligations.
That’s a good way of putting it. He and I talked a little bit about some stuff that’s going to happen later on in the season and that’s true. He’s going to get sucked into this sort of big picture issue that I’m talking about, 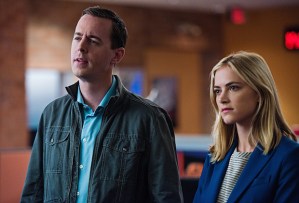 and it will really drive a wedge between him and his friends. It’s much further down the road but I’m eager to see it unfold.

TVLINE | I also understand that Bishop and McGee will be going undercover…?
There’s an undercover story that happens where McGee and Bishop have to portray a married couple, yes, so that was a lot of fun. We also do an episode where Vance has to go back into the field as a field agent, so there’s a lot of fun “buddy cop” stuff between him and Gibbs in the fourth episode. Then in the fifth episode, we’ve got this huge “Abby/Die Hard” story which finds Abby alone in a lab and she sort of has to use her wits in order to handle things.

TVLINE | Any recent guest castings or returns, like Jamie Lee Curtis, Alex Kingston, Diane Neal…? Weatherly said there would be some later in the season that “melt the avid NCIS viewer’s brain.”
I know that later in the season we’ve got some really fine guest spots that I’m planning on that aren’t locked in yet, but right now at the beginning of the season it seems to be all about this emotional roller coaster ride for Gibbs.