If So You Think You Can Dance‘s performance finale last Monday left you feeling like Gaby Diaz had already been crowned the winner, rest assured that her coach, Travis Wall, felt much the same way.

“Everybody feels it for her,” Wall tells TVLine. “She’s so funny off-camera and so easy to work with, and everybody really likes Gaby. It has a lot to do with not just how you look on TV, but what you have to deal with behind the scenes. She knows she’s going to be welcome back next year as an All-Star, hands-down.”

Wall — who competed on Season 2 of the Fox reality series and has since choreographed countless routines for the show — has been something of a guinea pig for Season 12’s Street vs. Stage theme, which found Wall going head-to-head with Stephen “Twitch” Boss as they coached separate teams of dancers. (Diaz is one of two Stage contestants who made it to the finale, along with jazz dancer Hailee Payne.)

Ahead of tonight’s season ender (8/7c), TVLine caught up with Wall to discuss the highs and lows of Street vs. Stage, what he would change about the theme if Season 13 is greenlit and the upcoming finale routine that he considers his best work on the show.

TVLINE | When the “Street vs. Stage” idea was initially pitched, what were your and Twitch’s reactions?
It was pitched to us as “Travis and Twitch.” They wanted to use us more and find out what America likes more — if they like a ballet dancer or a hip-hop dancer. We didn’t know how the format was going to go until we actually got onto the show. It’s brought out a lot of talent that wouldn’t necessarily ever make it onto the show. There’s been some highs, there’s been some lows, but overall, it’s really opened the door for surprises and not knowing people could do certain things. With [ballet dancer] Jim [Nowakowski], I don’t necessarily think he would have gone all the way through Vegas with the highest praise, because he would have had to do hip-hop and all these things which he wasn’t great at doing. It’s vice versa for both teams. 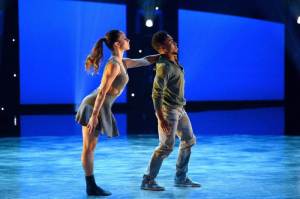 TVLINE | In terms of mentoring, we’re only seeing you in the rehearsals for a short amount of time with your dancers. What part of your coaching is left on the cutting room floor?
My honesty [with the contestants] is on camera for about 10 seconds, but I spend so much time with them. I’m hands-on in every aspect, and not just with the mentoring. I’ve also choreographed a lot this season, so I was responsible for a lot of their routines. I’m very attached to my contestants. I get upset when they get a bad routine, and I sometimes have to work with the costuming and say, “This doesn’t look the best on them. They’re not going to get voted for it.” I took it very personally this year, and that was a change for me, because I realized how much I cared about the contestants being represented the best way they possibly could.

TVLINE | Assuming the show comes back for Season 13 and uses this theme again, what would you like to see change, whether or not you’re a mentor?
We should be involved from the very beginning. We didn’t come in until Vegas this year, and we had say, but we didn’t really have that much say. When it’s coming down to who I want on my team, I want to be there from the very beginning. I think that’s what’s going to happen. I want to have control of who gets what [dancing style] every week, and not [have] the producers pick. I just want a little bit more control of my own team. The producers feel the same way, too. They want us more involved, which is great. If we get picked up next year, I think that will happen.

TVLINE | Nigel Lythgoe has often said that it doesn’t really matter whether a street dancer or stage dancer wins. Does it matter to you and Twitch?
It did in the beginning, but now it’s about who’s the best dancer. For me, if I could choose, it would definitely be Gaby. She is a dream to work with — in the room, on stage, she works so hard. So does Hailee, of course, but Gaby is a star when it comes to doing every single style perfectly.

TVLINE | What can you tease about the finale?
I just choreographed a duet for Jim and Alex Wong, and it is by far one of the best pieces I’ve ever done on the show. And I’m also dancing with Jenna Dewan-Tatum. We’re doing a duet. There’s a couple of new numbers, which never [happens] usually. It’s always rewinding. But we created a couple of special performances.

So You Think You Can Dancers, who are you rooting for in tonight’s finale? What routines are you hoping to see performed again? Hit the comments!