There are a lot of certainties during every Dancing With the Stars season: The likelihood that Derek Hough will be paired with a young firecracker who’s a shoe-in for Top 5. The odds that host Tom Bergeron will often act like he doesn’t want to do this job anymore. The chances that Julianne Hough will, at some point, wear a dress that puts her cleavage front and center (in case you didn’t already know it existed!).

Monday’s Season 21 premiere also served as a reminder that no matter how dismal the Week 1 routines — apologies, Chaka Khan — the judges won’t deliver anything less than glowing praise.

Are you Paula Deen, who just performed a quickstep that was full of hokey lip-syncing and sloppy footwork? Don’t worry! The judges just want to see “the Paula Deen we know and love” next week! Are you Kim Zolciak-Biermann, who was practically getting dragged across the dance floor by Tony Dovolani? Hey, no worries! At least “you did it”!

While the two-hour telecast did include small nuggets of constructive criticism from the judges’ panel, most of the reactions from Carrie Ann Inaba, Bruno Tonioli and Julianne Hough ranged from, “I was blown away!” to “You get an A for effort!”

Rather than revisit the evening’s average and/or forgettable performances — among them Alexa PenaVega’s jive, Tamar Braxton’s quickstep and Hayes Grier’s cha-cha — let’s detail the five routines worth talking about (for better or for worse) from Monday’s premiere: 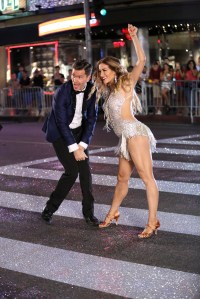 BEST OF THE NIGHT
Bindi Irwin and pro Derek Hough (Jive) — Truth be told, Bindi probably could have earned a decent score with her personality alone, which brimmed with infectious giggles and enough energy to light the ballroom. But Bindi also impressed with her jive routine, in which she was enthusiastic, light on her feet and unintimidated by her professional partner. If Bindi is eliminated in the first few weeks of the competition, well… crikey. Judges’ Score: 24/30

BEST OF THE NIGHT (RUNNER-UP)
Nick Carter and pro Sharna Burgess (Cha-Cha) — It’s no surprise to see professional boy bander Nick Carter in the night’s top two performances. What was surprising was how evident Nick’s nerves were in his first moments on stage, which caused him to cut off some of his movements before Sharna did. (When you ask your partner to include Backstreet Boys choreography in her routine, you follow through when it counts!) Still, once Nick got more comfortable on the ballroom floor, he was easily one of the evening’s most enjoyable performers. Judges’ Score: 24/30

MOST PLEASANT SURPRISE
Alek Skarlatos and pro Lindsay Arnold (Foxtrot) — I expected Alek to dance a lot like last season’s Michael Sam did: with good intentions, but heavy feet. (I mean, Alek hadn’t even heard the word “foxtrot” before stepping foot in rehearsal!) Instead, the National Guardsman was incredibly graceful and elegant in his performance, and he was there for Lindsay at every turn. There’s no saying how he’ll fare in more fast-paced routines, but Alek is certainly off to a strong start. Judges’ Score: 22/30

LEAST ENTHUSIASTIC PERFORMANCE
Kim Zolciak-Biermann and pro Tony Dovolani — I imagine Tony’s inner monologue to be, “Oh, DWTS gods, what did I do to deserve this fate?” Coming off a season where he and Suzanne Somers literally danced with fruit on their heads, things couldn’t have gotten much more grim for the pro… until he attempted a salsa with Kim. Given the Real Housewife’s waterworks before and after her performance, I expected Kim to perform with more passion. Instead, she managed to make even a simple handclap look like a chore. Judges’ Score: 12/30

WORST OF THE NIGHT
Chaka Khan and pro Keo Motsepe (Cha-Cha) — Yes, the Queen of Funk earned one point more than Kim Zolciak-Biermann did, so she wasn’t numerically the evening’s weakest performer. But after nicknaming herself and Keo “The Royal Couple” of Season 21, I expected Chaka to at least memorize the steps in her brief season-opening cha-cha. The final result, though, was a half-hearted routine that earned one of the night’s lowest scores. Judges’ Score: 13/30

With that, I hand it over to you. Which premiere routines will get your vote? Which couples should prepare to say goodbye? Hit the comments with all your thoughts.