Change is coming to ABC’s Castle.

For one, Kate Beckett (played by Stana Katic) is an NYPD detective no more. In turn, as revealed in promos, Nathan Fillion’s Rick is dipping his toe back into the private eye waters. There are also new faces in the mix, including The Neighbors alum Toks Olagundoye as a former Scotland Yard officer who gets pulled into Caskett’s world.

TVLINE | What all are you revealing about Kate’s career choice? Are you confirming that she is now captain of the 12th?
ALEXI HAWLEY | I think we can say that. At the end of the day we came into the season wanting to shake things up — partly because it’s Season 8 and while the show has been doing a great job at what’s it’s been doing, we’ve been given an opportunity to add some energy into it. We want to simplify the cases a bit so we can spend more time getting into our characters. And it’s across the board — it’s Alexis, it’s Ryan and Esposito, it’s Martha, it’s the new characters coming in, [played by] Toks [Olagundoye] and Sunkrish [Bala]…. And then of course you have Castle and Beckett. The important thing to say bout them is: The show has always been and will always be about their love affair, but we’re looking to add some drama to it, some spark to it. So we’re going to have fun. It’s going to be emotional at times, it will be romantic, it will be everything.

TVLINE | Was Kate instead making a senate run anything you ever considered? Like, 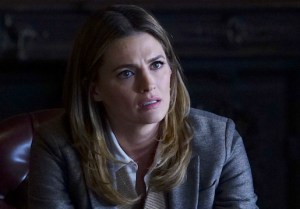 maybe she can stay detective and pursue that on the side?
TERENCE PAUL WINTER | It’s something we absolutely considered, and it’s not like it’s off the table. It might come back somewhere down the line, but don’t think it’s going to come back anytime soon. Ultimately what we realized is the best way to tell Castle’s stories is to have Kate and Castle investigating twisty, fun cases, and the best way to do that is to keep her in the precinct, focusing on that.

TVLINE | Meanwhile, what’s going on with the boys?
WINTER | It’s a very interesting story with the boys. After seeing Beckett ascend the ranks, Ryan and Esposito (Seamus Dever and Jon Huertas) are realizing maybe it’s time for them to start looking upwards with their career. But in doing so, they start to butt heads a bit, so the two at times get a bit at odds — but in a fun way.

TVLINE | Well, there was that beat the show played last season during Castle’s disappearance. They were almost being pissy 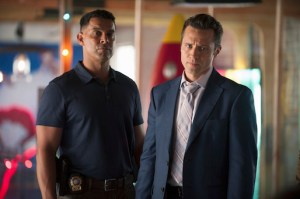 with each other as they took sides believing Rick or not.
WINTER | And you’re going to see a little more of that. Again, the dynamic between those two has always been “two brothers,” but we’re playing them at odds with each other and having fun with that. Ultimately it’s all out of love, but… There’s a little trouble in paradise.

TVLINE | Anything on the personal front for either of them?
HAWLEY | Ryan’s family is expanding — Jenny is expecting again — so he needs to make more money, all that kind of stuff, and that pressure will be driving him a bit.

TVLINE | And what’s going on with Lanie (Tamala Jones) and Espo these days?
WINTER | That’s a good question. We’ve got to figure that out. They’ve been on again/off again and we need to figure out what’s the honest next evolution in their relationship.
HAWLEY | We haven’t landed 100 percent on what we want that to be. We’ve gone back and forth as to whether there’s life in that story or whether there’s a different phase. That’s where that is.

TVLINE | What do you want to say 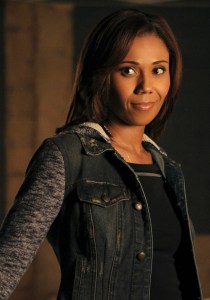 about Hayley Shipton, the character being played by new series regular Toks Olagundoye?
WINTER | I’m not going to say she’s a “game changer,” because that’s a cheesy thing to say, but she brings such a fantastic adrenaline shot to the show.
HAWLEY | What’s nice about her and Sunkrish [who’s recurring as tech analyst Vikram Singh] is that their characters, they’re voices we don’t have on the show, so it will give it us some new energy. At the end of the day Toks is playing an independent investigator who gets brought into the [season-opening] two-parter and will play a recurring role sort of helping out with cases along the way.

TVLINE | What’s going on with Alexis (Molly Quinn) this season?
HAWLEY | The exciting thing with Alexis this season was growing her up. Up until now, she has played more of child than a grown up, but she is a grown up, she’s in her early 20s at this point, so it felt like an opportunity for us to have a new relationship with her and Castle, to see her in a different light. We’re definitely presenting her as a young woman as opposed to a child, and there’s fun in that.

TVLINE | And she might see in Hayley a mentor?
WINTER | Absolutely. That’s one of the things we’re going for. This is a different kind of energy [than Alexis and onetime mentor Lanie] because Hayley is much different from Lanie. Hayley is going to help Alexis kind of find herself as she goes into adulthood. It’s an exciting new dynamic that these two have. The scenes we’ve already shot with those two together…. It’s magic, it really is.

TVLINE | Is Martha (Susan Sullivan) still in the loft?
WINTER | No, she’s not! But she’s definitely verrrry much part of Castle’s life. Don’t think that just because she’s moved out, got her own place and is doing well on Broadway, we’re not going to see her sharing her wisdom with her favorite and only son.

TVLINE | What can you reveal about the challenges facing Rick and Kate early in the season? Stana has hinted at “shifts” that set up a “high-velocity” Season 8.
HAWLEY | What we can say about it is that, as a character, Kate Beckett spent her entire adult life obsessed with solving her mother’s murder. 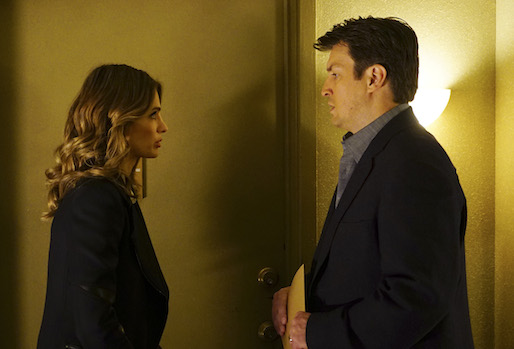 After that was put to rest, she tried to go on and live as if she could just close that door and not be that person anymore. And what we’re seeing at the beginning of this season is that that obsession, that part of her DNA, is still there, so she needs to deal with that in a way that impacts their relationship.

TVLINE | Stana of course was shooting a movie deep into the summer. Did her late availability steer at all the “dual perspectives” structure of the two-part season premiere? [Katic post-taped her scenes for the Castle-centric Part 1.]
HAWLEY | It did, but it actually ended up being a real opportunity. It allowed us to sort of bookend her in the first episode (which is titled “XY”), create a great mystery of “What’s going on with Beckett?” that ultimately pays off in the second episode (“XX”) in a big way.

TVLINE | The premiere in that respect has a Rashomon-like quality, exploring a mysterious series of events from multiple perspectives.
HAWLEY | Yeah, though for us what’s great is you set up the mystery of what the hell has she been doing, and then you get to go back and watch it happen, and it’s not exactly what you thought. So yeah, [the timing] was a blessing in disguise.
WINTER | It’s fun when little things like that force you to become more creative, and it ultimately paid off with dividends. Because the two-parter, we’re really proud of what we did with this thing. It’s going to be delightful.