As Once Upon a Time fans are well aware, the Savior ain’t saving no more.

As seen in the final seconds of the Season 4 finale, Emma — in the name of protecting Regina as well as the rest of Storybrooke — dared the Darkness, which had just been freed from Rumplestiltskin after hundreds of years, to consume her. And as it did, all that was left behind was the Dark One’s spinning dagger, now emblazoned with the name Emma Swan.

What does it mean that among the fairest of them all is now host to so frightful an entity? Who will endeavor to ride to her soul’s rescue, and in doing so what all (life? love?) will be put at risk?

TVLINE | What would you say the theme is for 5A?
EDDY KITSIS | I think the theme is “Love is a dangerous weapon.”

TVLINE | We’ve heard a lot about Emma feeling “freed” from Savior-ing, but beyond that, what kind of a Dark One 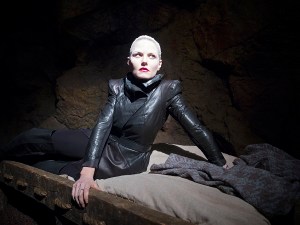 is she? Is she vengeful, is she power-hungry, does she have a bone to pick…?
HOROWITZ | She’s a very motivated Dark One. There’s a real driving force behind what she’s doing and why, that we will unfurl. It’s not like a rampant, uncontrollable evil that’s been unleashed. Emma as a non-Dark One was a very smart person who did things for a reason, and I think that translates.
KITSIS | She’s clearly going to be hiding something from the audience that will be revealed as the first half of the season unfolds.

TVLINE | Will we get to see Emma do decidedly bad things? I feel like when Regina went on that “bender” with the Queens of Darkness, you were torn between having her doing bad things but “we can’t make them too bad” — so they just, like, torched a police cruiser.
KITSIS | Emma is going to do something particularly bad coming up, and to the people she loves.

TVLINE | There are publicity stills of Emma in training mode, but with old school Rumplestiltskin. Given his coma, that would suggest she not only traveled realms after being consumed by the Darkness, but through time as well.
KITSIS | She did not travel time; she did travel realms. And why Rumple’s there will be immediately explained within the first act of the premiere. 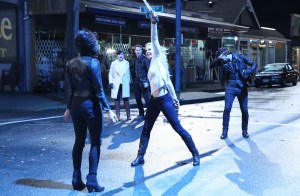 standing there on Main Street wants to help Emma. What sort of distinct, perhaps conflicting paths will they choose to that end?
KITSIS | We saw in Season 3, when they went to Neverland, that Emma was there to coach, she united them all. Now they find themselves in a place where everybody wants to save Emma, but everybody has a different opinion on how to do it, so emotions are very heightened. David and Regina and Mary Margaret are also tasked with looking after all the citizens, yet at the same time the villain right now is Mary Margaret and David’s daughter, so they have a bias, and that’s going to be used against them.

TVLINE | Jen [Morrison] and Lana [Parrilla] talked at Comic-Con about how their roles have sort of been “flipped” here. How does the role of quasi-savior fit on Regina at first?
KITSIS | Awkwardly.
HOROWITZ | It’s not necessarily that Regina is the Savior, but she has been put into a position now where she owes Emma [for saving her from the Darkness]. She’s become a more heroic character over the years but now she has her biggest challenge yet, and it’s an awkward fit for her because she’s not used to having to lead or take charge. And she’s got to work with people like Hook, who has a very strong interest in saving Emma as well. And both Hook and Regina are strong personalities. 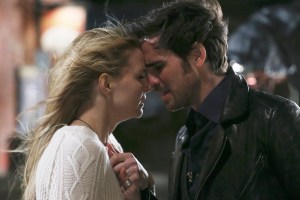 be more active in this arc? Perhaps his most active since Neverland?
KITSIS | He is hell-bent on saving Emma, so he is going to be quite active over the first 10 episodes.
HOROWITZ | Emma facing the darkness as the new Dark One forces Hook to confront the darkness in himself that he’s spent hundreds of years coming to terms with. It gives him unique insight into Emma’s predicament and pushes their relationship to what we think are exciting but also potentially dangerous places. It’s never been easy for these two, and things are only going to get dicier. That said, Hook has proclaimed his love for Emma — and he’s not going to give up on her easily.

TVLINE | I have to wonder, was it tricky to break the Rumple story for this arc? Because you don’t want to keep one of your most entertaining 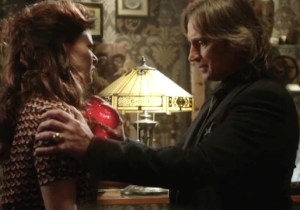 characters in a coma for too long, nor do you want to bring him back as a diluted version of himself…
KITSIS | It was tricky, and hopefully we found the porridge that was just right, where we kind of get to have everything.

TVLINE | And is it Belle’s charge to do what she can to save Rumple? We’ll see the more adventurous Belle?
KITIS | We’re absolutely going to get the more adventurous side of her, especially when she and Merida (Amy Manson) find themselves on and adventure.
HOROWITZ | We’ve always wondered what would happen if Belle and Merida went on an adventure together. We hope you do too, ’cause it’s coming!

TVLINE | You promoted not just Sean Maguire but also Rebecca Mader to series regular status. What’s the plan for Robin and Zelena?
KITSIS | Robin is really just picking up from last year; he is with Regina, we know Zelena is carrying his baby, and Zelena 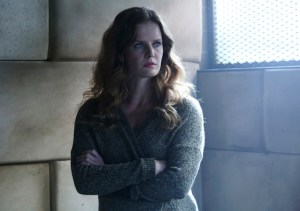 is the “wild card,” so to speak. She’s like the Hannibal Lecter. We can never really trust her and we never really quite know what her motives are, but we absolutely know we should be frightened of her. In the premiere, people will see why.

TVLINE | I see her as a fly the heroes have to keep swatting away. Like, as if they didn’t already have enough to deal with…
KITSIS | That is exactly the best way to put it.

TVLINE | Camelot is the primary other realm we’ll be in this half-season, as the search for Merlin gets underway. How might that kingdom’s residents help or hinder our heroes?
KITSIS | You have some big personalities there. You’ve got King Arthur (played by Liam Garrigan), Guinevere (Joana Metrass), there are rumors that Lancelot (Sinqua Walls) is on his way back… Camelot and the search for Merlin (Elliot Knight) is very germane to the central goal of our heroes. And while some people are going to immediately [befriend our heroes] — you’re going to see a huge bromance between Charming and King Arthur — some people might be more skeptical of them.

TVLINE | After all, I can’t imagine the people of Camelot have just been sitting there, waiting to help 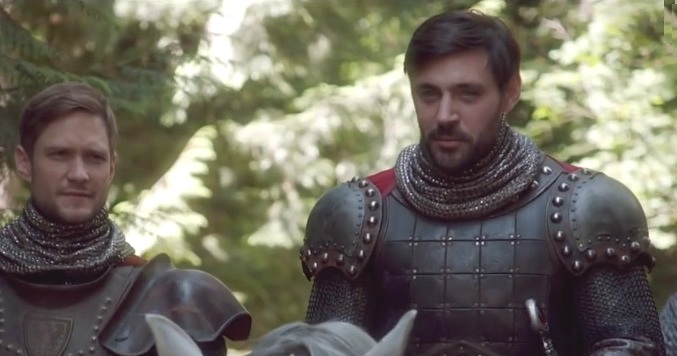 interlopers. They probably have their own drama going on.
KITSIS | Yes, exactly. And I would say that they have a similar goal to us.

TVLINE | To be clear, Camelot’s timeline is parallel to ours?
HOROWITZ | It works just like The Enchanted Forest or Arendelle. They’re all just a few days ride away from each other.

TVLINE | Camelot could just as easily be, say, Detroit.
KITSIS | It’s exactly like going from Cleveland to Detroit. 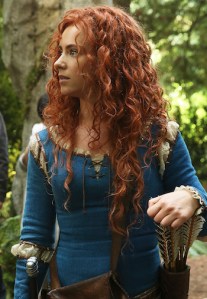 different this season. But will there still be some centric flashbacks?
KITSIS | We’re obviously going to get some of Merida’s story, and there’s absolutely going to be King Arthur/Guinevere/Lancelot origin stories.
HOROWITZ | And will be getting an Emma flashback in the early part of the season.

TVLINE | Another reader asks: “Is the incredible resemblance between the new King Arthur and a certain one-handed pirate just happy coincidence?”
KITSIS | [Laughs] It is just a happy coincidence.

TVLINE | Do you have anything else to say about 5A?
KITSIS | Yes — please watch it. Sundays at 8. Watch it live, the way it’s meant to be. Watch it with your friends, watch it on TVLine, watch it on Twitter…. We’re very excited for people to see it, because this is a season that we really truly think is a season for the Oncers.

TVLINE | How about one last, random teaser?
KITSIS | Well, I hope there’s a full moon this year…. You never know who might come out during a full moon. Or come back, I should say! [Meaning, as has since been officially confirmed: Ruby’s returning!)