We’ve got questions, and you’ve (maybe) got answers! With another week of TV gone by, we’re lobbing queries left and right about shows including Masters of Sex, The Last Ship, The Late Show With Stephen Colbert, Under the Dome and Top Model!

1 | Was Sunday’s wedding-themed, family-focused Ray Donovan the best episode of the show’s entire run? We’ll go ahead and answer that one for you: Yes. Yes, it was.

2 | Do any Masters of Sex fans have a genius research idea that will keep Josh Charles’ Dan in town longer? (Because we need him to stay.) Also, when will Bill realize that palling around with his son’s bully is not cool?

3 | Is such a stretch of the Mississippi River deep enough to accommodate The Last Ship‘s Navy destroyer? And to echo many a TVLine reader: Wouldn’t Dr. Rachel Scott aka Savior of the Free World have had a bodyguard/escort, and wouldn’t a hotel hosting POTUS employ better security?

4 | If you’re a Strain hero tasked with turning Red Hook’s power back on, wouldn’t you just aim all the big levers toward the most logical setting? Do you really need to rifle through a dusty user manual? Also, wasn’t it entirely expected that Nikki would show up mid-skirmish to score her first slay?

5 | It’s OK if we delete an entire unwatched season of Bachelor in Paradise, right?

6 | What in 1950s-era tarnation was So You Think You Can Dance judge Nigel Lythgoe rambling about when he said that two male contestants cannot “feel comfortable” dancing together in an emotional, contemporary-style piece?

7 | Switched at Birth fans, did it irk you how little Lily was in the episode, considering it was really her decision whether or not to keep the baby? 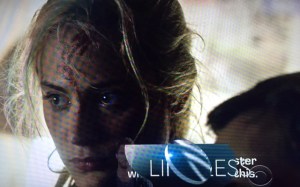 8 | Our French is admittedly a little rusty, CBS — what were the Zoo subtitles that got obstructed by your Limitless ad? Also, how can CGI give us, say, a giant snowman stomping around Storybrooke, yet not convince us that a leopard is in the same room as James Wolk?

9 | Is there a weirder promo on TV right now than The Rachael Ray Show‘s giant hot dog and hamburger running toward each other on the beach?

10 | Does Whoopi’s View contract guarantee her the last — and mostly unchallenged — word on every single topic?

11 | Wasn’t it convenient that Extant‘s Molly “saw” who shot JD via the exact same third-person camera angles and edits that the show’s director used when filming that scene? 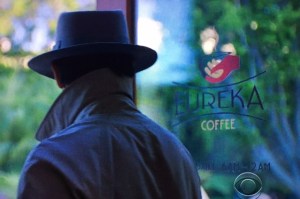 And who suspects that, in any possible Season 3, Goran Visnjic aka John will play TAALR? (Speaking of which: Wouldn’t this coffee shop signage be backwards to the people approaching from outside?)

12 | Is there only one toilet in the entire America’s Next Top Model house? If not, how the heck did Mamé wind up feeling like she had every right to bust in to the bathroom in the middle of Hadassah’s shower?

13 | Big Brother fans, how badly did you want Austin’s girlfriend back home to be the one who sent him a video message? 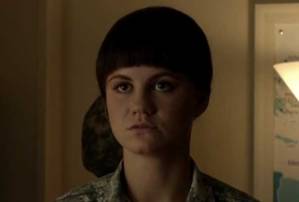 14 | Really, Under the Dome? You couldn’t give Norrie a better time-jump wig than this?

15 | Does Graceland make you feel silly for ever grumbling about the bad roommate(s) you once had? These people shoot and slug each other!

16 | Granted it’s still very early, but anyone else feeling like The Colbert Report‘s “Stephen Colbert” > The Late Show‘s Stephen Colbert? 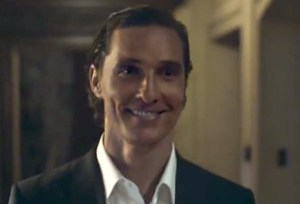 17 | That automobile manufacturer must be backing up trucks full of money to Matthew McConaughey’s beach bungalow, right?

18 | Given everything that transpired over the past eight months, did the New England Patriots’ over-the-top NFL Kickoff pre-game revelry/celebration make you uncomfortable?