You’re the Worst‘s commitment-adverse main couple, Jimmy and Gretchen, are doing the unthinkable in Season 2 (premiering Wednesday at 10:30/9:30c on FXX)— getting serious about their relationship!

“Season 1 was always them against each other,” star Chris Geere noes. But now that the pair is living together, “It’s them against the world. So they’re kind of like Batman and Robin, but snarky. They struggle an awful lot, but it’s just been great.”

Here, the actor previews Jimmy and Gretchen’s “compromise” as part of a darker storyline ahead, possible engagement talk and his Brit-inspired Sunday Funday Halloween getup.

TVLINE | [Series creator] Steven Falk told me there’s a darker event midway through Season 2 that changes things a bit for Jimmy and Gretchen.
I like to call it the fifth character. There’s something that happens, not a person but a thing, that comes into play. The series from then on becomes about how they, individually and as a foursome, deal with this thing. It forces them to compromise quite a lot and have to work out whether this is what they want to do in terms of the relationship, which of course they do. How they get there is so beautifully done and so real, I think people are going to super support us in how we dealt with it. Because it’s a darker thing, and there’s a fine line, really, approaching a subject like what it is without being too negative about it all and still keeping it light and funny. The awkwardness that comes about because of this situation makes it hilarious. 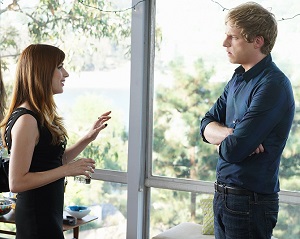 TVLINE | How is co-habitation going for Gretchen and Jimmy?
[Laughs] Not very well. They pick, consciously and constantly, not wanting to grow up, so moving in together is, “Oh, just something that’s happened, but we should carry on partying as much as we did do before.” And then they hit a point where they say, “We have to stop or we’re going to die,” [Laughs] which I think is really funny. Then it’s about the transition of the space and who’s stuff is going where and what space is whose. Jimmy’s really struggling with the fact that it’s his house and now he has these two freeloaders, which he constantly calls them, staying there.

TVLINE | But Edgar does some light housework. What about Gretchen?
She does nothing. Can you imagine Gretchen cleaning up after herself? No. It just gets messier and messier. And then as Edgar becomes more interested in other aspects of his life, he kind of gives up on the house, as well. So at one point, I think it’s Episode 8, we come home and the house is a wreck, like teenagers have been there. They are lovable teenagers.

TVLINE | To be fair, as I think Gretchen says in the premiere, Jimmy gets to wake up next to all of that. So there’s that.
Yes. Exactly. [Laughs] He lets her live there, and she’ll give him whatever he wants sexually. Done!

TVLINE | It was surprising the way they kind of glossed over the fact that Gretchen thought he was going to propose and thus accepted his proposal. Does that come up again?
It’s referred to a couple of times. But yeah, we had to move on from it and not dwell too much because a natural progression for [Seasons] 3, 4, 5, if we’re lucky enough to ever get there, would be an engagement, maybe, again. So to make a callback to it then might make more sense. I can’t wait to see what the next milestones will be.

TVLINE | Are there any big ones in Season 2 that they hit?
Not with us, but with another one of the four. Lindsay has a few things happen to her that she was not expecting, and it’s all of us having to deal with that.

TVLINE | What’s in store for Sunday Funday, Part 2?
It’s Halloween. Edgar was in charge last year, someone else is in charge this year. To shoot it, production-wise, was like doing a small movie. If the fans loved it last year, they will love it this year because it’s, like, 26 minutes, yet we had 18 locations. There’s a lot of background, there’s a lot of makeup and costumes, and it’s so fun. And there are a lot of montage sequences, which we’ve learned to love or loathe. I’ve realized I’m terrible at montages. [Laughs]

TVLINE | Without giving it away, can you tease your Halloween costume in the episode?
[Laughs] It’s a British character that no one is very fond of — apart from Jimmy himself.