Everybody knows that moving in with your significant other is merely the first stop on the train to Snores-ville, but you’ll be happy to know that’s not quite the case for You’re the Worst‘s Jimmy and Gretchen — at least not if they have anything to say about it.

Wednesday’s season premiere found the FXX comedy’s it couple doing everything in its power not to succumb to the soul-crushing pitfalls that co-habitation brings. This included, but was not limited to, doing mountains of cocaine together, accepting unlabeled pills from strangers at the bar and, last but not least, attempting “butt stuff.”

In the end, Jimmy and Gretchen determined that it’s OK to take it easy every once in a while, and that they “couldn’t be one of the sweater people even if [they] wore, like, 10 cardigans each.” (The tongue-lashing Gretchen received from Sam after missing a lunch meeting certainly pushed her in the right direction.) 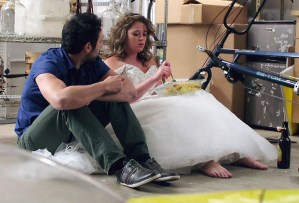 Speaking of human train wrecks, Lindsay’s half-assed plan to get over Paul totally blew up in her face — or, rather, in her hand. But maybe that’s because her plan shifted to seducing her future ex-husband, causing him to cheat on his (allegedly) small-boob’d Internet lady friend.

Edgar thought he’d gotten through to her — while also trying to get into her pants — but the joke’s on him, because Lindsay’s hiding a little something extra next to the Bagel Bites in her freezer: a condom full of Paul’s sperm! (I’m not a scientist, but if there’s one thing I’ve learned from watching Being Mary Jane, it’s that the condom-in-the-freezer thing does not work.)

Of course, the YTW premiere didn’t just make me laugh; it almost made me think, particularly about the new vocabulary words it introduced. Let’s discuss some of those words, shall we?

* Head wigglies (noun): the painful feeling you get in your brain when you consume something cold too quickly — commonly known in America as “brain freeze.”

* Sprawling (verb): the act of spreading your legs and butt on something, preferably while nude.

* Sweater person (noun): a dull individual, often in a committed relationship with another sweater person, who barely even remembers what it was like to have fun.

* And, lastly, Zoiddle (noun): a Google-esque company; far cheaper to reference on a TV show than actual Google.

Your thoughts on the first episode of Season 2? Grade the premiere below, then drop a comment with your full review.