The Vampire Diaries has delivered its share of epic Big Bads over the past six seasons — Klaus, Silas and Kai, just to name a few — but Season 7 is hoping to top itself with the introduction of the Heretics, a swam of vampire-witches with an unquenchable thirst for trouble.

“They’re pretty far from anything the show has seen so far, which is really exciting,” newcomer Elizabeth Blackmore, who plays Heretic Valerie, told TVLine during a recent set visit. “There’s some funny adjusting at first — they’re waking up 100 years in the future where there are iPhones, computers and all that — but there’s also some darkness going on.”

That “funny” adjustment period doesn’t last long, as Paul Wesley told us the Heretics “do something pretty horrible in the season premiere, and it’s like, ‘Really, guys?'”

Read on for more scoop about the Heretics, as well as their leader (who, might I add, looks oh-so regal in our exclusive first look at the Oct. 8 season premiere above).

PICKING SIDES | As we previously reported, Enzo will have to choose whether he wants to side with Lily or with his Mystic Falls frenemies, but it won’t be as black-and-white as all that. “Each ‘side’ is coercing him into making a choice,” Michael Malarkey explained. “He feels this connection with Lily and her family, a place to fit in, which is a huge deal for him. But he also has allegiances to Caroline and Damon. No one’s going to say, ‘Go hang out with the Heretics and we can still have a beer.’ It doesn’t work like that.”

FAMILY DYNAMICS | Things within the heretic community will also be pretty complicated. Even though Valerie is accepting of her fellow Heretics — specifically Nora and Mary-Louise, the show’s first same-sex couple — they’re not always so nice to her. “There’s a lot of bickering,” Blackmore explained. “Valerie is more of a loner because she’s quite often left out of things. She tends to be a little moodier than the others.” 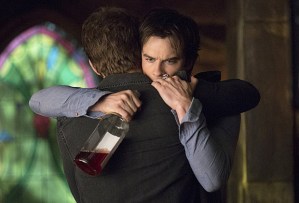 SIBLING RIVALRY | And how will Lily’s real children feel about this new “family” of hers? Let’s just say they won’t be posing for a Christmas card anytime soon. “She’s not [Stefan’s] enemy, but she’s not totally his mom,” Wesley explained. “She’s definitely not on his side, and he doesn’t trust her, but he has more empathy for her than Damon has.”

Echoing that last sentiment, Ian Somerhalder added, “It’s not cool at all that she left us and had this entirely new family that we’re not even a part of. She treats us like we’re outcasts, like we’re the bastard children. There area lot of dynamics floating around, so I don’t know where Damon’s going to go from here.”

TVD fans, what are your thoughts on the Heretics? And how do you hope Season 7 plays out? Whatever you’re feeling, drop it in a comment below.