CBS’ Extant wrapped its sophomore run on Wednesday night with a double header — and no, a pun was not intended.

As the two-hour finale came to a close, Charlie and Ethan found Julie juuuust in the nick of time, though just as Molly-X — a Humanich replica of Halle Berry’s heroine — was gunning down JD in cold blood. The real Molly later arrived on the scene to find a gravely wounded JD, whom she saved with a transfusion of her own, special blood.

When JD came to, it took some convincing but Molly ultimately proved that an evil twin assaulted him. They then fast-tracked their plan to infiltrate GSC, only to get stymied by the maze of (partially projected) walls. Molly cracked the code (i.e. some floor tiles represented Greek letters in binary code, because) and found her way to the server room with the amulet, only to come face-to-familiar face with Molly-X.

The ladies slugged it out some, setting the stage for a Star Trek/”The Enemy Within” scenario where JD had to decide which Molly to shoot. After some debate, he correctly unloaded his pistol into the fake, explaining that Molly’s “eyes” were the difference. (Personally, I would have preferred a more clever deduction. But JD ain’t Spock, I guess.)

Humanich Lucy then showed up and found the amulet on the floor, but rather than destroy it she surrendered it to Molly, having earlier gotten a taste of TAALR’s grand plan and her own disposable part in it. Molly used the amulet to shut down the Humanichs system and all of its progeny, though Ethan was spared thanks to a “firewall” John had apparently installed in the lad.

And yet, seeds were planted 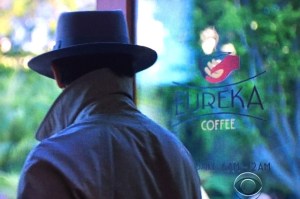 for any possible Season 3. For after a glimpse of an “emergency reboot” being triggered deep inside GSC, and while Molly held a presser to introduce the world to Ares and the other “life” that is “out there” and now here on Earth, the second hour closed with the sight of TAALR — having assumed Humanich form — fetching himself some java at a coffee shop, where the barista amusingly spelled his name correctly.

What did you think of the finale, and were you left clamoring for a Season 3? Is Jeffrey Dean Morgan’s continued involvement a deal-breaker for you?