Tuesday’s Playing House season finale featured quite possibly the most ill-timed conga line in all of television history. (No, you’re being overdramatic!)

An over-the-top policeman’s ball presented the perfect opportunity for Emma and Mark to finally address the big, sexual elephant in the room, and despite a few hiccups throughout the evening — including an Andie MacDowell look-alike and, you know, the fact that Emma still had a boyfriend — it seemed like their happily-ever-after was finally in reach.

Then came that damn conga line I mentioned earlier, splitting Emma and Mark apart like one of Bird Bones’ many broken appendages. To make matters even more unfortunate, Maggie found herself back in bed with Bruce, though I’m happy to hear everything’s working “right as rain” down there.

It wasn’t until Emma and Maggie (as Bosephus!) returned from being imprisoned at a Kenny Loggins concert — it’s a really long story involving a woman named Jeanine Will-Call — that Emma and Mark finally came face to face on her front porch. Of course, we won’t know exactly what he came to tell her unless USA Network picks the comedy up for a third season. (That was your official cue to launch a Twitter campaign, by the way.)

Ultimately, though, Playing House‘s season finale wasn’t just about Emma’s budding relationship with Mark, or even her breakup with Dan; the two-parter was also another loving tribute to Emma’s friendship with Maggie, something this show does so well on a regular basis. The girls’ realization that it’s been exactly a year since they started living together, coupled with their mutual freak-out over Kenny Loggins, served as a reminder of why we love and connect with this show so deeply.

Were you as tickled by the Playing House finale — and simultaneously desperate to know what Mark had to say — as we were? Grade the two-part episode below, then drop a comment with your full review. 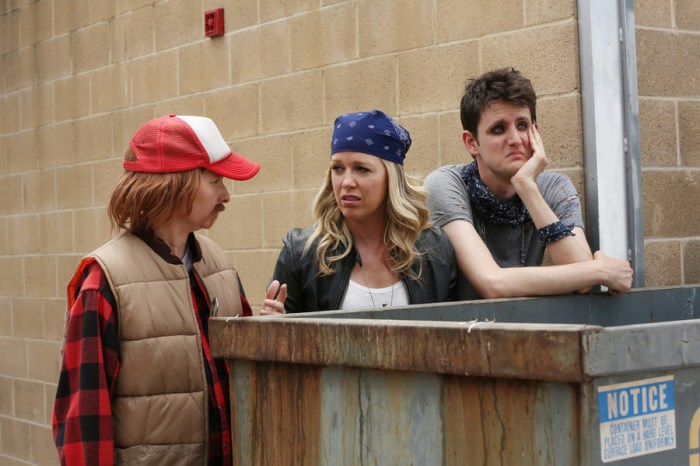