THE PERFORMANCE | Anderson’s performance as Hannibal‘s haughty-trippy Bedelia du Maurier has, for two seasons now, been a study in cool, calm and controlled — with undercurrents of wicked and sensual, and a top note of the slightly psychotic. In the show’s series finale, though, as Bedelia was confronted with the reality of her erstwhile patient/”husband” Dr. Lecter on the loose and preparing to have her for dinner, the actress seized her mere three-and-a-half minutes of screen time to paint an astonishingly visceral portrait of terror, disbelief, rage and disgust.

The establishing shot of Bedelia — eyes darting around in a panic, lip slightly curled with mounting fear — told us more vividly than any dialogue that her romantic rival and sniping partner Will Graham (Hugh Dancy) had informed her of his plan to free Hannibal and use him as bait to capture the notorious Tooth Fairy serial killer. Anderson allowed silence to linger, as Bedelia attempted to catch her breath (and pour herself a stiff drink) before carefully expressing her utter bewilderment at such a thoughtless plan.

Moments later, though, as Bedelia eased into her therapist’s chair and confronted Will eye-to-eye, her tone shifted to one of warning: “However you think that you are going to manipulate this situation to your advantage, think again,” she purred, every word glistening with menace and contributing to an operatic crescendo. “Who holds the devil, let him hold him well. [Hannibal] will hardly be caught a second time.”

Finally realizing that Will wasn’t merely committed to his plan, but enjoying the terrible position it put her in — “I’d pack my bags, Bedelia,” he practically smiled, “meat’s back on the menu” — Anderson stripped Bedelia of her icy facade for one glorious line. “You righteous, reckless, twitching little man,” she hissed. “You might as well cut all our throats and be done with it.”

After the closing credits, showrunner Bryan Fuller snuck in a little denouement underscoring that a quick blade to the carotid, in fact, might’ve been a true gift to Bedelia. As the camera panned back from the woozy, décolletage-spilling doc at a banquet table, we realized it was her own leg that had been roasted and served by some unseen tormentor. (The culinary presentation did hint at H., though, didn’t it?) Through the haze of meds and madness, though, Anderson allowed us to see the unthinkable — a slight grin emerging on Bedelia’s terrified face — after which she reached for a deadly two-pronged fork from her place setting, yet another move on the Hannibal chessboard. The brilliance and beauty of Anderson’s finale work made us hope that if, by some long shot, Fuller revives Hannibal at another network or transports it to the big screen, Bedelia Du Maurier will have legs. Or at least one of ’em. 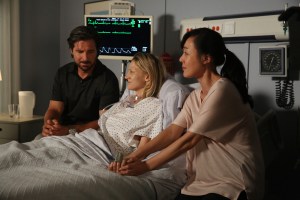 HONORABLE MENTION | Yunjin Kim has certainly had crazier moments on ABC’s summer sudser Mistresses, but as her Karen entered the quiet confines of a hospital intensive care unit to say goodbye to her dying lover Vivian, she was never more authentic or affecting. Early in the hour, Karen allowed Vivian to touch her stomach — and have a moment of closeness with the growing fetus they’d conceived during their polyamorous relationship with Vivian’s husband Alec. As Vivian’s liver went into a state of sepsis, however, Kim expressed the raw pain and undercurrent of love and gratitude that comes when a loved one is ready to pass. Kim’s reaction shots as Vivian filmed a video to be played for the child they’d conceived together only made Sonja Bennett’s monologue that much more heartbreaking, but it was her followup monologue that proved downright revelatory. “After everything I’ve been through in my life, very little surprises me. But you — you surprised me. Boy, did you surprise me. And I am so grateful for that,” Karen began, and Kim let us feel the urgency and the weight of what she knew was a final farewell. “I thought saving you would give my life meaning. But loving you is what has given my life meaning, my sweet, graceful friend.” With ABC still mum about Mistresses‘ future, it might also be time to bid adieu to Kim’s sweet, graceful performance. Sad as that may be, you can color us grateful, as well. 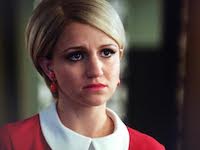 HONORABLE MENTION | Although Masters of Sex has made Betty its go-to zinger flinger, Annaleigh Ashford isn’t just comic relief, she’s also a helluva dramatic actress — a point she drove home in “Surrogates.” Yes, Betty had tried to trick boss Bill into impregnating her lover. And yes, it was wrong. But no way was she gonna let him lecture her about keeping her personal affairs out of the office, not when he’d been cheating on his wife with colleague Virginia for years! And yes, of course, Betty knew. As the secretary put it, “I’m a lesbian, not a moron.” In the end, she asked Bill to do what she long had, and look the other way. We, on the other hand, wouldn’t — and couldn’t — take our eyes off of her portrayer.