You’re the Worst is “going to get f–king weird” in Season 2, creator Stephen Falk warns.

Next Wednesday’s premiere (airing at 10:30/9:30c on FXX) finds commitment-phobes Gretchen and Jimmy living together, but the toughest challenge may still be ahead of them. When a more serious issue comes up for the couple mid-way through Season 2, “the show gets pretty dark,”  Falk previews.

“Falling in love is serious sh-t,” he continues. “But at the same time, it’s really, really dumb and funny and gross. We’re really just trying to represent all of that.”

Below, Falk also previews Lindsay and Paul’s future, Sunday Funday’s Halloween-themed return and explains why he finds the idea of Lindsay and Edgar “gross.”

TVLINE | The Season 2 renewal took a while. Were you nervous? Did you think the show might not come back?
Yeah, I was a little nervous just because our ratings weren’t spectacular. But at the same time, I knew they believed in the show, and I, certainly, was incredibly proud. And there was a weird part of me that, if we had not done another season, would have been OK with it because I think we made a really, really strong season. If it only existed as a little 10-episode miniseries in history, I would have been not fine with it, but somehow a little bit OK with it.

TVLINE | Aya Cash mentioned to us that there will be a darker, deeper storyline this season. What is the context for that?
I really want everyone to experience it as it unfolds, so I can’t say what it is, although I would love to. It just surrounds an issue that Jimmy [or] Gretchen has in their personal life that threatens to really derail the relationship, and it’s something that’s very common among a lot of people I know and creative people. So we tackle it head-on in all its messy horror. It was really an effort to challenge ourselves and to see if we could make something that sounds so unfunny funny, or at least render it in a comedic situation. I think we did a good job. We’re blessed with such fantastic actors. There was a danger walking into a second season where it’s about co-habitating that we would end up just feeling like a middling episode of Marry Me —which, I don’t mean to slight that show, I’m sorry. But we were very aware that this could be a very typical story like, “Who’s going to wash the dishes?” Not only would Jimmy and Gretchen never have that argument because they don’t give a sh-t [Laughs], but there’s a giant, giant pitfall that we had to avoid walking into, and I think we did it pretty well. But yeah, it was a little scary. 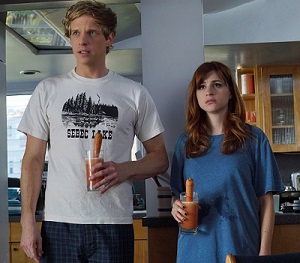 TVLINE | How does co-habitation change Jimmy and Gretchen as characters?
Lindsay’s former husband Paul says that the definition of love is putting someone’s needs above your own, and Lindsay’s response is, “Ew.” That’s the thematic thread that runs through this season… The beauty about Jimmy and Gretchen is that all their horrible aspects are accepted by the other, but what this does is make them make a gesture towards the other person, which for them is a big f–king deal.

TVLINE | And how are their careers faring?
Not really great. Gretchen inadvertently starts a giant rap beef between the three [rappers]. So there’s a lot of diss tracks that I got to write, flying back and forth. She mismanages that pretty badly. Jimmy’s desperately trying to make some money to keep that beautiful house while he percolates, as he says, on his second novel. Now that’s he’s ruined interviewing for himself — he can’t do celebrity profiles anymore after last season — he’s trying a few different things.

TVLINE | Turning to the other characters, what exactly is Lindsay and Paul’s status this season? Are they separated? Are they divorced?
They’re on the road towards divorce. There’s papers at some point. We meet [Paul’s girlfriend] Amy “the beer kooz,” as Lindsay calls her. Lindsay’s lost what she didn’t really want. It kind of makes her crazy. So she’s trying to win Paul back, in a certain way. 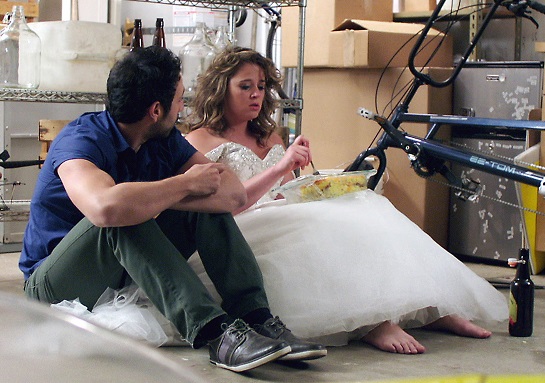 TVLINE | Is Lindsay oblivious to Edgar’s possible infatuation with her? Or is she just using it to her advantage?
Oh, no, she becomes very aware of it. She knows what happened while she was singing, so we’ll see her, at least for a part of this season, absolutely try to use it to her advantage. But Edgar becomes aware of that and doesn’t let it happen.

TVLINE | Does that relationship turn into something genuine, or are they just too different?
Gosh. I think Edgar and Lindsay together would be incredibly gross. They’re both too frickin’ weird… You’ll see them trying to figure it out. I think it would be too disgusting to really work in the long term, but I could be wrong. They might be perfect for each other. 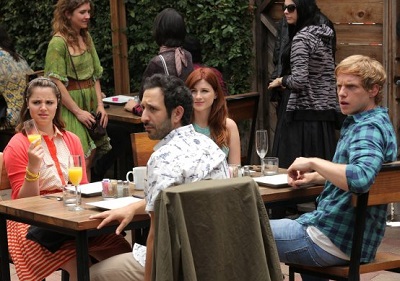 TVLINE | There’s another Sunday Funday installment in Season 2. What do they get up to this time around?
They get up to some crazy bananas sh-t. It’s Episode 8, and it’s really bonkers. We realized that our Episode 8 was going to air the week of Halloween, so it’s a Halloween episode.

TVLINE | Oh, so there’s costumes involved, which I’m assuming you can’t reveal.
I can’t, but they’re awesome. Yeah, our costume department is dope. Our costumer Wendy Benbrook costumes Kiss for a living. So she’s very adept at spooky Halloween sh-t.