The 24 vet will recur on Supergirl this fall as General Sam Lane, father of Lois and Lucy Lane (Witches of East End‘s Jenna Dewan-Tatum).

According to IGN, which first broke the news, General Lane is a “powerful military lifer and an overprotective father” to Lucy and Lois. Upon arriving in National City, he enlists Supergirl in a dangerous government initiative.

Though he is best known for playing 24‘s Aaron Pierce, Morshower has also appeared on Friday Night Lights, Dallas and Bloodline. No word on when the actor will make his Supergirl debut; the series premieres Monday, Oct. 26, at 8:30/7:30c on CBS.

* America’s Got Talent has been renewed for an 11th season to air next summer, NBC announced Wednesday when it revealed audition dates.

* For the first time, the Cinemax dramas Banshee (returning in January) and Outcast (debuting in 2016) will have panels at New York Comic-Con this October. Taking place at the Javits Center, Banshee‘s panel will be held Thursday, Oct. 8 (7 pm, Room 1A06); Outcast‘s will take place on Saturday, Oct. 10 (1:30 pm, Room 1A06).

* Echo Kellum (Ben and Kate) will recur on Season 2 of You’re the Worst as Tall Nathan, a member of the improv group that Desmin Borges’ Edgar will join, per The Hollywood Reporter.

* HBO on Wednesday released the first photo from All the Way, its upcoming adaptation of Robert Schenkkan’s play starring Bryan Cranston as President Lyndon B. Johnson. Scroll down for your first look at Cranston as LBJ — but be prepared not to recognize him. 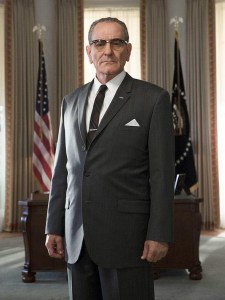