The following contains spoilers from the Mr. Robot Season 1 finale.

USA Network’s Mr. Robot wrapped Season 1 on Wednesday night with an intense hour in which the brilliant Elliot Alderson (played by Rami Malek) came to realize,, more than ever, that his sense of reality had been “hacked.” That he was in the midst of a major psychotic break, to the point that he had been assigning the face of his dead father to an avatar he dubbed Mr. Robot (Christian Slater).

Having haggled with that harrowing epiphany — and on the heels of an odyssey in which he tried to ascertain what he’d been up to in the three days prior, that frenemy Tyrell Wellick was now ominously MIA — Elliot retreated to his apartment, where someone came knocking. Meanwhile, in a provocative post-credits scene, Angela’s E Corp boss Phillip Price was seen chatting with… White Rose, aka the transgender Dark Army leader who helped with fsociety’s epic hack, in disguise (BD Wong explained to Vulture).

TVLine spoke with Mr. Robot creator Sam Esmail — who safeguards secrets like Apple — about booting up this ambitious drama, the finale’s big twists and the Season 1 scenes that wowed him.

TVLINE | I first wanted to invite you to think back to mid-March, to the SXSW Film Festival (where Mr. Robot won the audience award in the Episodics category). What was going on in your mind before the pilot screened there?
Honestly, in making this show I knew it was so peculiar and specific, I just hoped that we would survive. I always joked that if we could just get “cult status” I’d be pretty happy. [Laughs] It’s all kind of a blur but what was insane was the Q&A afterwards. We had a line of people to ask questions, and we were told that wasn’t really happening at the other screenings. 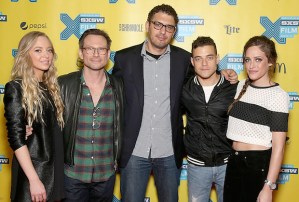 It was interesting to see people really engaged with and excited to talk about the show. That’s what I love about television or films — after you finish watching it, you want to run to your friends and talk about every detail. The fact that we got that level of engagement was really exciting.

TVLINE | When you first shopped the show around, what sort of feedback did you get? Were there concerns about the directing, the grayness of the characters…?
People’s biggest concern was with the VO (voiceover), they felt there was too much VO. And also they thought that the tech stuff was going to get a little complicated. I hate that stigma that VO has — for me it’s one of the best tools in screenwriting, even though it goes against a lot of rules in screenwriting. Some of my favorite films — Clockwork Orange, Taxi Driver, Goodfellas — have amazing VO. There’s an intimate relationship you can have with an audience that you can’t have with just dialogue in scenes.

As for the tech stuff, on the one hand people were interested in that because they felt it was in the zeitgeist and very current. But on the other hand, Hollywood had so gotten it wrong every single time they tried to do it, in film and in television, they were concerned they’d have another miss.

TVLINE | Why do you think it is that a heavily narrated, distinctly directed drama that is dense with tech lingo and rooted in questions of morality was able to “pop” in the middle of the summer?
To be totally frank, I have no idea. But here’s what I will say: I went to see the Joe Edgerton movie The Gift last weekend, and I remember feeling like I had no idea what’s going to happen next. The plot went in directions I didn’t know it was going to go, so I left the movie feeling like, “Well, that’s really rare now.” And that to me is upsetting, because I remember that in all the paranoid thrillers that inspired Mr. Robot — like Se7en or The Usual Suspects, The Sixth Sense, The Game — that’s the feeling I would have. You left The Usual Suspects wanting to talk about it with all your friends. And I think if anything this show really surprised people in every episode. Sometimes they didn’t love the surprises, but oftentimes the fact that it was surprising was good enough. Maybe that’s something that distinguishes us from a lot of films and television shows. 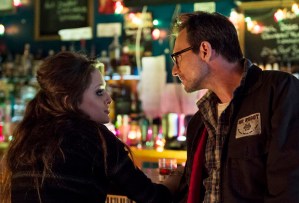 viewers were for a while theorizing about whether Mr. Robot was real or not. How did you make yourself OK with that, the fact that people got a jump on that twist?
I actually wanted the audience to be a little ahead of Elliot on that. And we were telegraphing it intentionally, to the point that people thought it was a misdirect. Even with the Darlene reveal [that she is Elliot’s sister], I was never obsessively hiding anything, because I think that’s actually dangerous to do to an audience, because then it starts to feel cheap and it reduces that moment to a “Gotcha!” That was never the intent for us, especially the moment in the graveyard. I wanted you to be with Elliot in his slow realization that this serious disorder is starting to creep up on him. That was purely an emotional point for that character, so I wanted the audience to not be distracted and really be with him in that moment. Even with the Darlene twist, I thought people were going to guess that, too.

TVLINE | That one admittedly blindsided me good.
But if you look back it wasn’t like we hid that very well. I find that in the movies that work with me, they actually tell you the twist, though they do it in a clever, nuanced way. I remember reading how the Sixth Sense producers wanted to cut the line “I see dead people” because they thought that would give [the twist] away. But what’s brilliant is you tell the audience without explicitly telling them, and then when the reveal does finally happen it feels earned.

TVLINE | In the finale’s Times Square scene, Mr. Robot insists to Elliot, “We’re all together now.” But Elliot at least for the time being was able to block it out. Will that be dropped, or is will it be a recurring taunt moving into Season 2?
People always ask me, “What’s the show about?” I couldn’t really answer that question in all honesty until now. Originally I wrote this as a feature and this was the 30-page mark, the realization Elliot has about his fragmented personality. Having to face his alter ego and starting to reconcile that in a real way. That to me is what the heart of the future seasons of this show will be about. 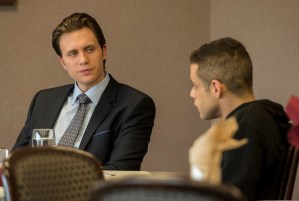 So when Mr. Robot says he’s not going away, that’s true for Elliot and the show.

TVLINE | How much should we worry about the conspicuously missing Tyrell? You have such a magnetic actor there in Martin Wallstrom.
Yeah, he’s great…. I think I’m going to plead the fifth on that, so I don’t spoil anything for anyone.

TVLINE | What do you want to say about who’s at Elliot’s door?
What’s great about that, because we obviously talked about it a lot, is that the audience is allowed to participate with us. Your imagination can run wild. There are a lot of possibilities that we introduce in the episode that could answer that question. The fact that the audience can theorize and put who they want behind the door and play that out is for me the fun part. So I’ll answer your question like that!

TVLINE | Is the after-credits 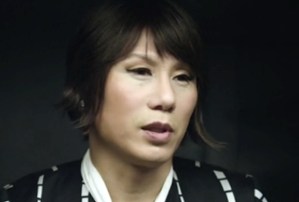 coda to suggest that BD Wong (Law & Order: SVU) will have a more prominent role in Season 2?
I would be stupid not to work with BD Wong again. He’s such an amazing actor, and the scene that he did in [Episode 8]…. He was just brilliant.

TVLINE | His first scene was, what, three minutes? And yet he created such a character in White Rose.
Oh my God, just from top to bottom. The rhythm,, the cadence, everything. He’s just an excellent actor.

TVLINE | It was ironic that you purposely edited into the finale a timely Ashley Madison hack reference, only to have the episode wind up reflecting a different current event (the live, on-air Virgina shooting), in an unfortunate way (and thus was postponed a week).
Yeah…. The Ashley Madison thing was there in the pilot, one of the pieces that Elliot uses as leverage against Lenny. So what happened was in the original draft of the finale… I used Ashley Madison again, but then I felt like, “Eh. I’ve already made reference 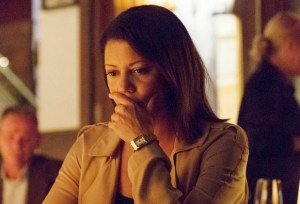 to that, let’s cut it.” And then when we were editing it, the actual Ashley Madison story came out and I was like, “How can we not?” It just makes total sense, so we put it back in.

TVLINE | Will Krista be a more active character in Season 2?
Absolutely. Another great actress, Gloria Reuben. She was obviously rocked by what Elliot told her and she will obviously be distrustful of him, but I think that because she knows how damaged he really is — and because shes’ a psychiatrist — she can find a way to empathize with him and hopefully engage with him again.

TVLINE | Which scene from the first season, once it was all put together, most wowed you?
The White Rose scene wowed me in that every time I pictured that scene, it could have gone so many different ways, and whatever BD did, along with Rami, in that scene, elevated and made it 10 times better than anything 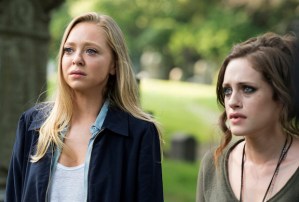 I pictured in my head. It felt very organic. And for all the elements of that scene mixed together to feel organic, that’s an incredible feat.

The graveyard scene was another scene that needed to be pulled off perfectly. Everything from the directing to Carly [Chaikin] to Portia [Doubleday] to Christian, and obviously to Rami’s heartbreaking, vulnerable performance, where he made that realization one would have about their own psychotic break…. If you think about that, it’s almost unfathomable to imagine, yet somehow he finds a way to make that feel incredibly real and authentic. That really wowed me, for sure.

TVLINE | And as we were saying, it’s probably a scene that some viewers had pre-written in their heads, so you have to put your own distinct stamp with it.
Yeah. The thing is it was all Rami’s performance, and if there was even a little bit of a miss there, we would have gotten nailed for it badly. But Rami delivered in spades.

TVLINE | You have an acclaimed cable drama, you just this week got engaged to the lovely Emmy Rossum (Shameless)…. What else is possibly on your to-do list for 2015?
I wish I could take lots of vacation and go to the Caribbean, but I actually have to start working on Season 2 in a few weeks. So… not much! Except for more Mr. Robot. 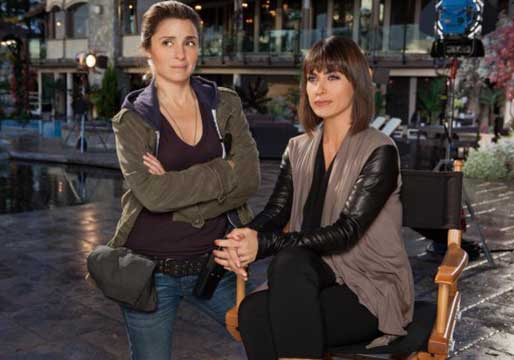