After 21 seasons, Dancing With the Stars fans know better than to expect a “Who’s Who?” of A-listers when ABC unveils the cast for its biannual reality staple. As the network dragged out news of the show’s fall 2015 lineup over the past week, however, the response from the DWTS faithful went something like “Who? Who?” followed by the telltale “whaa whaa” of a sad trombone.

Aside from R&B legend Chaka Khan and Victor Espinoza (the jockey who guided American Pharoah to the first Triple Crown win in 37 years), the Season 21 cast is chock full of “celebrities” only identifiable with the help of Google (“What’s a ‘Vine star’ Hayes Grier?”) and/or names that require a Clorox Disinfecting Wipe every time they’re typed or verbalized (oh, hi there, Paula Deen!)

The sad smorgasbord of Carlos PenaVega, Alexa PenaVega, Gary Busey, Kim Zolciak Biermann and Bindi Irwin — just to throw a few more wet towels into the heaping pile on the laundry-room floor — got me wondering: Is this the best the show’s casting department can do?

After all, the 13.3 million total viewers and 2.3 demo rating pulled in by last May’s finale were still as spicy as a well-executed samba — so how come nobody along the lines of prior standouts like Jennifer Grey, Apolo Anton Ohno, Hines Ward, Amber Riley or Meryl Davis is in the mix this time? Heck, even a campsterpiece like Lisa Rinna, Kirstie Alley or Carson Kressley might’ve saved Season 21 from the dark cloud of “who cares?” descending over the Alphabet network’s Monday-night proceedings.

What about an All-Athletes Edition? Or a “regular folk” cycle? (The waitress at our local French bistro is a budding flamenco enthusiast, and I can assure you she’s got at least as much personal magnetism as Nick Carter.)

If I can think of a couple ways to shake the cobwebs off the show’s formula, how come DWTS’ EP Rob Wade & Co. are content to rest on their piles of sequins and boas? 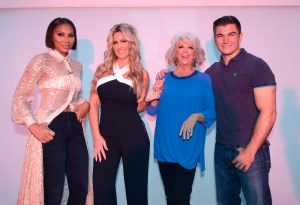 If I ran ABC, I’d give Dancing With the Stars a cycle off. Or putting it another way, I’d give it an extra six months to brainstorm more intriguing tweaks to its formula and to track down more unexpected “celebs” (or celeb-adjacents) to make its results less predictable.

To refresh your memory, here’s this season’s full lineup:

Take our polls below to tell us whether you’d give DWTS a vacation, how many of its celebs you recognized (without the help of a search engine) and what “Special Editions” might reinvigorate your interest? Then hit the comments and expand on your thoughts!