Prepare to see a whole new side of Shane Harvey when Faking It‘s second season resumes Monday (MTV, 9:30/8:30c). Actually, make that every side.

“There is some nudity, or implied nudity,” Michael Willet tells TVLine of the midseason premiere, explaining that Shane attempts to lead a naked protest — and ends up being the only participant. “You know, it does seem like they’re always trying to get the guys naked. … The girls, too. … OK, they’re trying to get all of us naked.”

Below, Willett previews Shane’s drama in Season 2B, including a major hiccup in his relationship with Duke, his ongoing power struggle against Lauren and… wait, what’s this about a Shane-Karma hookup?

TVLINE | Before I ask you about anything else, I need to verify something I think I saw in the Season 2B trailer: Do Shane and Karma hook up?
[Laughs] I can confirm there is a Shane-Karma kiss. It’s pretty intense… and sensual.

TVLINE | But I imagine, this being Faking It, that we shouldn’t take that at face value.
That’s how the show is: Just when you think you know what might be going on… you’re probably wrong.

TVLINE | Do Shane and Karma have a legit storyline together? I feel like I never see them share scenes.
Shane and Karma end up battling for a boy, each trying to take him to prom. So Shane is more in the mix than you’d expect. It’s also difficult for Liam and Shane this season to remain close; there’s some betrayal. 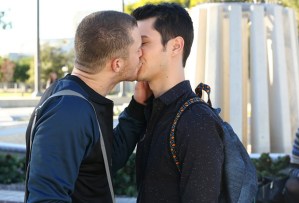 TVLINE | Speaking of betrayal, Duke doesn’t know Shane outed him. What’s their relationship like in Season 2B?
They are officially, openly together — which is exactly what Shane wanted — but there’s also this overriding guilt because Shane outed Duke. … That makes it very difficult for them to have a healthy relationship. It’s a great first love, though. I really enjoy them together.

TVLINE | And can we hope for more Shane-Lauren action?
Absolutely, they have one of my favorite dynamics. They respect each other’s power, but they hate each other at the same time. There’s an episode where we go on a little adventure to help Lauren, and we end up pretending to be cheerleaders at one point, which was one of my favorite scenes to shoot. I’d never been a cheerleader, but I could definitely make fun of them.

Fake-rs, what are you hoping for/excited to see in Season 2B? Browse our gallery of preview photos, then Drop your wishes in a comment below.