The more things change on MTV’s Faking It, the more they stay the same.

Sure, Hester High might look a little different in the second half of Season 2 — following Karma’s parents’ big drug bust, the school has essentially become a prison — but as we saw on Monday’s premiere, its inhabitants are still a bunch of no-good, yet totally good-looking, liars.

Karma lied to Amy about new-guy Felix being gay, as part of a clumsy attempt to hide that his family is now renting her house; Shane continued lying to Duke about who really outed him to the press; and I think we can all agree that Liam and Karma are lying to themselves about the state of their relationship. (Try as she might to “let it go,” there’s no way Karma is totally over Liam sleeping with Amy, and he’s delusional if he thinks she’s ready to get back together with him.) 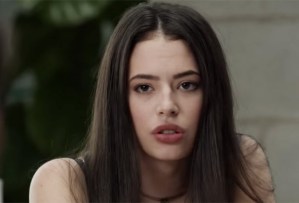 In fact, the only character capable of dishing out any truth in the premiere was Liam’s new Skwerkel intern pal Seeta. who told him to give up hope of becoming anything more than Karma’s friend-with-benefits. Of course, given Chloe Bridges’ history on shows like Pretty Little Liars and The Carrie Diaries — not to mention this sneak-peek shot from prom — I can’t help but feel like Seeta might have ulterior motives for keeping Liam single.

All that unpleasantness aside, I’m loving Shane and Lauren’s ongoing battle for power. She’s got the new principal — who also happens to be Felix’s father — wrapped around her little finger, as only she could, while Shane… well, who else would you want to see leading a (solo) nude protest? Come on, now.

OK, time to get real: Grade the Faking It premiere below, then drop a comment with your full review of the episode.