Tonight at 8/7c, it’s the town of Defiance against the purple people-eaters as the Syfy series brings Season 3 to a close. Will Amanda be able to snap out of her funk to help lead the charge against the Votans’ feral foe?

Julie Benz spoke with TVLine about the surprising finale, why there ain’t no party like a Defiance live-tweeting party, the Votan she’d like to play and more.

TVLINE | Before we get to the finale, I wanted to rewind to the start of the season. What kind of weather did you all get there in Toronto? Because it’s got to be a lot of weather if there are massive amounts of snow in every scene.
Surprisingly, that was all fake and it was like 80 degrees. Just kidding! [Laughs] No, it was horrible. It was horrible! It was, like, negative-30 [degrees]. We were freezing. I came up with the idea of having two different size clothes, so I would have my “indoor” wardrobe that actually fit me and then I’d have my outdoor wardrobe which was bigger so I could put, like, three or four layers on underneath. And I became really good at lining my legs and body with heat packs, underneath my clothes. It was unbearable. [Laughs]

TVLINE | What’s our plan?
I think the plan is to try to fight them off. But I’m not sure how well that’s going to work.

TVLINE | Yes, even the synopsis describes it as “a potential suicide mission.” Does that sound about right? 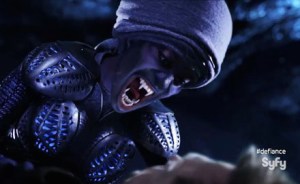 That is about right!

TVLINE | What I enjoyed about the Omec as an adversary this season is they’re just a nasty beast. I mean, the teeth and the temperament, the appetite….
They were fantastic, they really were. It added an extra element of surprise, that there was another alien race out there. We had said that we established all the alien races, and then we brought in this one that nobody had heard of. And they’re the one species that everyone is afraid of. In many ways, they are the one thing that brings all the Votans together, because you have to unite to fight them. But yeah, they’re just awful. They’re like vampire aliens. [Laughs]

TVLINE | What is specifically on tap for Amanda in the finale?
Amanda does her best to try to save the town, but we see her fractured a bit. We saw that unraveling of her in the last episode, because it’s all on her shoulders, what’s happening. She feels responsibility [for welcoming the Omec to Defiance], and it’s a large cross for her to bear.

TVLINE | It’s almost tradition that Nolan is dead or presumed dead, or trapped in a pod, in the Defiance season finales. Is it perhaps Amanda’s turn to be left in peril?
Amanda is put in jeopardy in the finale…. There are going to be a lot of surprises, but I think that everyone’s going to feel good about the way it ends.

TVLINE | Do we get a sense of what Season 4 will look like, if the show gets renewed?
We do get a sense of maybe a new landscape that we could possibly explore.

TVLINE | As you have seen, I really enjoyed how everyone on the cast upped their live-tweeting game on Friday nights. How is that for you on the other side of the keyboard there?
I kind of spearheaded the whole thing, so I quite enjoy it! Years of attending different sci-fi conventions and genre conventions for all the shows I’ve been on made me realize that rather than waiting for a Dragon-Con to connect with our fans, we can actually connect with them every week while watching the show. It’s an additive experience for the fan base, and it also adds for us. Our show, as dramatic and serious as it is, lends itself very well to a certain amount of humor, and we have such a witty cast…. I think we’re The Cast of Snark. [Laughs] We have fun with it, and I think the fans appreciate that.

TVLINE | I remember how in one of the season’s early weeks, the live-tweeting theme was, like, double entendres, and every other line in that episode could have been one. I don’t know if that was coincidence, or that’s how the Defiance writers write….
[Laughs] It’s kind of how they write. We played that game “That’s What She Said!” on set to get through the brutal weather! 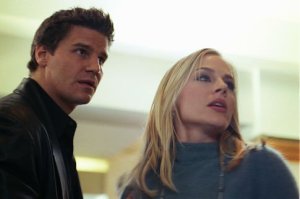 during your Buffy/Angel days, who do you think would have been the best at it?
Um….. I still think me. [Laughs] Or, probably Alyson Hannigan — she’s pretty active on Twitter now, and she’s very witty and funny. We kind of had Twitter back then — [series creator] Joss [Whedon] was like the first one to use the posting boards as a launch pad for different ideas for the show, to use them for immediate feedback on each episode.

TVLINE | And who do you think would have been most bashful at social media?
Oh, it would be a toss-up between David [Boreanaz] and Sarah [Michelle Gellar]. They’re both very private.

TVLINE | Lastly, if you could play any other character on Defiance, who would you choose?
Oh, wow…. That’s a hard one because I don’t want to have to go through all of that hair and makeup! 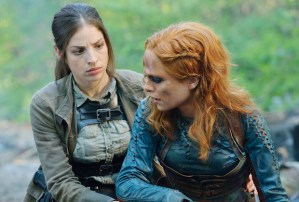 Doc Yewll, but as cool as that makeup is it must take forever.
It does take forever; [Trenna Keating] definitely has the worst process as far as getting ready — and getting home as well. I walk off set, I change my clothes, I get in the car and go. She’s got to get all that taken off, which takes a toll for sure. I would like to play Irisa. I like her, especially now that she put some braids in her hair. It’s more fitting for me!