Remember the innocent days when everybody on Mistresses was indulging in steamy sex, icy cocktails and the kind of salacious fun on which the Parents Television Council built its mailing list?

Quick! Somebody grab Karen’s hooker wig, Joss’ living-room toilet (remember that?), a half-dozen overpriced candles from  April’s shop, all the high-end vodka in Calista’s mansion, and a scrapbook of shirtless snaps of the ladies’ myriad exes: Because while I have unfailing faith that showrunners Rina Mimoun and K.J. Steinberg wouldn’t end next week’s season- and possibly (blasphemy alert) series-finale installment on such a grim note, I can’t pretend I’m not stressed out by the unsettling action of this week’s hour, “Reasonable Doubt.”

I’m on vacation right now — so don’t get cross if I’m pithier than uzh* — but let’s recap the action, shall we? (*Yes, I’m trying to make a text-y abbreviaysh of usually happen — just go with it.) 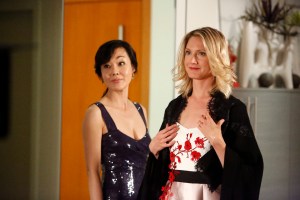 KAREN | Why does it hurt the most when Karen cries? Maybe it’s because if a licensed psychiatrist with a Miss America pageant figure and a gorgeously minimalist apartment can’t find a shred of human happiness, then the rest of us are as doomed as the last Oreo in the sleeve. Anyway, this week Karen goes to the doctor with Vivian — and learns the lady-love side of her thrupple has a failing liver — and few options outside experimental treatments. Alec, however, is less than 48 hours away from receiving a lifetime achievement award at a black-tie gala, so Karen agrees to keep Vivian’s condition a secret, even going over to her erstwhile lovers’ place to help Vivian get prepped (and hide her telltale back rash). Alas, though, they don’t even get out the front door when Vivian collapses — and despite Karen’s hasty 9-1-1 call, the lack of Sonja Bennett in next week’s previews has me worried Karen will be repurposing her black shawl for a funeral. 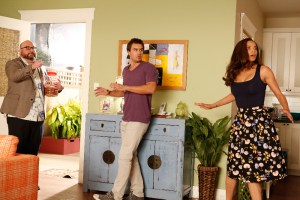 APRIL | Long story short, just as Marc gets up the courage to ask April to go to a concert — isn’t that a first date only for people in their early-to-mid-20s? — his sister Miranda returns with a new fiancé and a plan to move Scotty to Las Vegas. Marc is gobsmacked, shellshocked and all those other old-fashioned words that mean he’s visiting wtf.com. But when April sticks up for the way he’s stepped up on Scotty’s behalf — during a very logical family meeting outlining why he shouldn’t be uprooted mid-school year — Miranda (Florida swamp vermin that she is) drops this bombshell: “Was he stepping up when he fell off the wagon two weeks ago?” Ugh — I hope those concert tix are refundable, and that Miranda’s next cruise experience includes at least two feet of raw sewage in her cabin. 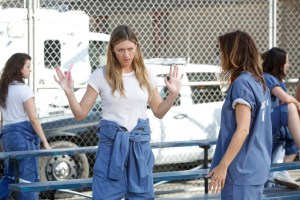 JOSS/CALISTA | The police have become convinced that Joss and Calista conspired to kill Luca — which is why neither of ’em is rocking designer duds — and stuck in those terrible blue jumpsuits — for another week. Calista starts a fairly tame prison-yard brawl with her old BFF — Joss’ end-of-scuffle kick is pretty bad-ass though, no? — in order to get placed side-by-side in solitary, but whaddaya know, Joss has absolutely no interest in pow-wowing get-out-of-jail-free strategy with the woman she now views as being ruled by “blinding narcissism, selfishness, and deceit.” And, if that’s not enough of a crisp slap, Joss observes each and every one of Calista’s “friends” is on her payroll. “I wanted you close because I really loved you,” sighs Calista, before apologizing. But you’d have to be crazier than Elizabeth Grey (Season 1 watchers, that A+ reference was for you) to trust the sexy-slurry-sadistic fashion designer, wouldn’t you? Joss prepares to take a plea deal of 10-12 years (one in which she incriminates Calista), while Calista’s lawyer suggests her client confess to a “trap Luca in infidelity” plot that led to Joss losing her mind and pulling the trigger. Sure, there’s a chance Calista might actually be guilty — wouldn’t it be a really cool twist if she dunnit? — but chances are, both women are grappling with telling lies to save their own hides or else sticking with the truth and both doing hard time? The hour closes, rather surprisingly, with Calista overhearing Joss’ tearful phone call to her mom, and then foregoing counsel and confessing that, in fact, she is the one who murdered Luca — with no help from Joss. 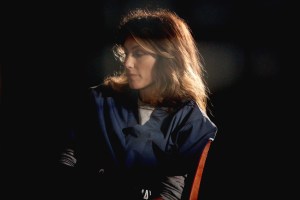 This raises two big questions: Will Calista’s admission end the search for Luca’s true killer? (All together now: “It was Wilson!”) But more importantly, is Calista’s act of selflessness big and bold enough to earn a second shot at friendship with Joss (and the possibility of Season 4 mimosas with April and Karen — and hopefully Ari)?

I leave that to you. What did you think of Mistresses‘ second-to-last Season 3 outing? Will Vivian die? Should Marc and April at least dip their fingers in the paint jar before calling it quits? And will Calista actually go down for her husband’s murder? Sound off below!