Warning: The following contains spoilers from Wednesday’s finale of Suits.

Wednesday night’s summer finale of Suits pulled a bait and switch when faux lawyer Mike decided to quit the firm — for his sake and fiancée Rachel’s — only to then be arrested. (Perhaps that confession to his childhood priest wasn’t such a good idea?)

Meanwhile, Harvey also resigned after saving Pearson Specter Litt from Hardman’s clutches. But now that his protégé is in trouble, will the lawyer return to work? Are the other keepers of Mike’s secret in trouble? And has therapy made Harvey into a man that can be with Donna? Below, executive producer Aaron Korsh answers those burning questions and more.

(Reminder: Suits‘ usual lead-out, Mr. Robot, had its finale postponed this week; the episode features a scene similar to this morning’s Virginia reporter shooting on live television, so it will now air Wednesday, Sept. 2 at 10/9c.)

TVLINE | Should we assume that the priest was the one who gave Mike up?
The rules of confession are that he absolutely cannot hand Mike in, in my mind. That doesn’t mean he didn’t. But it’s very interesting. It is everybody’s first question: who turned Mike in? That wasn’t my first question. My first question, both as a writer and when I put myself in the shoes of our characters, is: “What the f—k are we going to do to get out of it, if anything?” The writers, their first question also seemed to be, “Whodunit?” We ended up finding a middle ground where we both explore who did it and try to find out who did it in service of getting out of it. We don’t find out right away, but we will find out. Hopefully, it will be someone that you do not expect.

TVLINE | Now that Mike’s in trouble, will that galvanize Harvey to come back to law and help him?
Every decision that everybody made before Mike got arrested, it’s all now back up in the air, back in flux. [His arrest] just trumps everything. They have to circle the wagons and do whatever they can. It will, absolutely, at a minimum, cause Harvey to reexamine the choice he made. However, Forstman and Hardman are still out there. If he could have undone that decision easily in the first place, he wouldn’t have made it. That’s one of the challenges of the first episode back is dealing with that.

TVLINE | There are a lot of people who know Mike’s secret, who are accomplices to his crime. Are they in legal jeopardy now, too?
Seems to me they probably might be. [Laughs] Yeah, they’re certainly not free and clear.

TVLINE | Jessica told Louis that he was part of the family. Going forward, can we expect him to maybe stop trying to attack his own colleagues?
[Laughs] I don’t necessarily view Louis as always attacking his own colleagues. Sometimes I do. To defend Louis for a minute, Harvey did promise him that he wouldn’t sleep with his sister. Harvey did punch Louis. Louis might have shoved Harvey, but Harvey punched him. But I like to see both sides of it. Louis is, obviously, very loyal and very loving of his firm and his family. In the back six [episodes], he’s going to probably be Louis. He’s going to probably have moments of heroism and moments of less-than-heroism. This thing is going to test some pressure points of our firm. It’s going to allow people to both rise or fall depending on the situation. 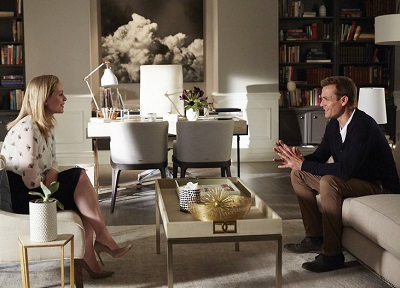 TVLINE | Are we going to see more of Harvey’s therapist next season?
I would like not to be done with Dr. Paula Agard. I thought she was a great addition to the cast as a character and as an actress. We are trying to figure that out. It’s possible that we may see her in the back six and/or that we may see her in Season 6.

TVLINE | Harvey made so much progress in therapy. Is there a change in him in the back six? Is he maybe more ready for a relationship?
He did make a lot of progress. In a world where Mike hadn’t gotten arrested, that progress would manifest itself more… He’s going to be in crisis mode right now rather than looking to pursue a healthy relationship moving forward. His growth has occurred in fits and starts and will continue, just like I said about Louis. 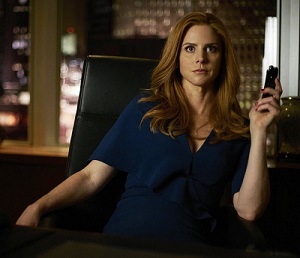 TVLINE | Given the emotional progress Harvey has made this season, do you feel like you’ve inched closer to the possibility of a relationship between Harvey and Donna?
The truth of the matter is I do not have an answer to that because I don’t know. The story is going to take us where it goes. All of a sudden, one day, something’s going to happen and we’re going to know and then we’ll do it. In terms of major things that have happened in the course of the show, many of them were not pre-planned. Donna getting fired was not pre-planned. It happened during the middle of a rewrite. Mike getting caught was pre-planned at the beginning of this season, but I certainly didn’t know it a year ago. Even Scottie coming in and them trying to make a go of it. So many things that have happened are just in the moment, “We’re going to do this.” If something happens with Harvey and Donna, it’s going to be like that, I think. We’re still working on the back six. You never know. That’s the best I can say.

TVLINE | Does Donna feel like Harvey is ready or good enough for her right now? Before when we talked, you said that Donna was of the mind that them in a relationship together would never work. But now that he’s been in therapy and she knows about it, might her feelings change?
I don’t know that the notion [of] just finding out someone’s been in therapy makes them ready. If someone walked up and asked Donna that question, I’m not 100 percent sure at this moment what her answer would be. But that question isn’t going to be brought out in Donna unless it’s relevant. She’s not sitting around wondering if Harvey’s ready. Something’s got to make that question present in her, and it would have to be a moment that they have together. If that happens, she would evaluate probably based on the current circumstances what her current feelings are on that matter. But I don’t know just that the knowledge that he was in therapy is going to get her to think, “Oh, he’s ready.” Because she doesn’t know what’s going on in that therapy.

Suits fans, what did you think of the finale cliffhanger? Grade the episode via the poll below, then hit the comments with your thoughts! 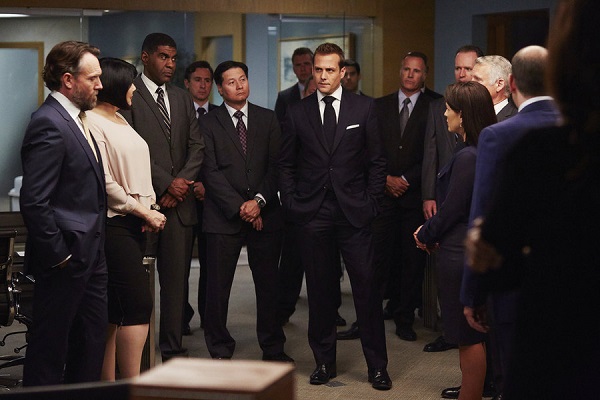