After heading down a dark spiral and turning in her badge following pal/colleague Nadia’s death, the detective is “checked out” during the Season 3 opener, executive producer Matt Olmstead tells TVLine.

“She’s at a club, drunk,” the EP says. While her mentor/father figure Voight is “heartbroken,” he has to move on and accept that Lindsay isn’t going to come back to the force. Her ex, however, has a different point of view on the matter. 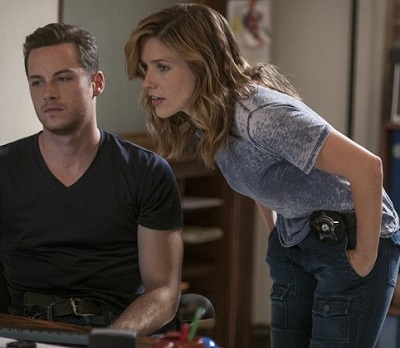 “Halstead’s the one who doesn’t really want to believe it’s true,” Olmstead reveals, adding that he even goes as far as confronting Lindsay outside the club and telling her, “‘I want to hear it face-to-face: Tell me that you’re done.’ She tells him she’s done, and he walks away. Her last champion walks away.”

Needless to say, there won’t be any kind of romantic rekindling — at least, “initially” — between the former couple. “His only concern is, ‘I’m just trying to get her to live,'” Olmstead says.

Meanwhile, Lindsay’s drowning in “self-loathing” and dealing with her mother Bunny, “who’s more than happy to keep the party going because [she] finally got [her] daughter back. It’s very unhealthy.”

The debauchery is put on pause when one of the Intelligence team members gets in “dire straits” in the season premiere and Lindsay volunteers to help with the case. Lindsay’s return to work “creates a major triangle between Bunny, Lindsay and Voight, because Bunny now feels very spiteful towards Voight,” the EP previews. “He did it again. He pried [away her] daughter.”

But will Lindsay remain on the Intelligence Unit? “Offering [her] services to help out on this case is different than actually getting her job back,” Olmstead points out. “Getting her job back is a bigger journey. She has to prove [herself] to a lot of people. She walked away. She handed her badge in.”